Playing in a Women's Hockey Tournament

Share All sharing options for: Playing in a Women's Hockey Tournament 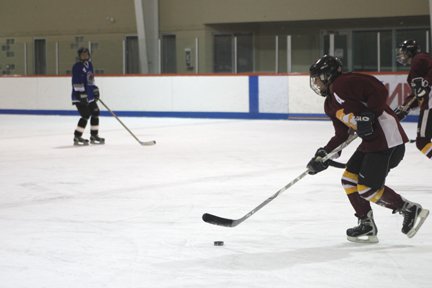 Besides being the dedicated gamethread opener for Fear the Fin, I am also the first line right winger for USC's women's club hockey team. Last weekend, we traveled to Vancouver for a three day tournament. While this has nothing to do with the playoffs, we'd thought it be neat to show the women's side of things, as well as the hockey madness in Vancouver. Enjoy!

There is nothing like playing in a weekend hockey tournament. Teams come from all over – local, a few hours away, sometimes even from a different country. The skill levels vary widely, as do the sizes of the teams. Teams play multiple games in a day, a necessity due to the short length of the tournament. You’re tired, thirsty, and your legs are burning from skating as hard and as fast as you can. In the days after the tournament, a flight of stairs seems like Everest. You have large bruises and pulled muscles in places that you didn’t even know existed. It’s the greatest feeling in the world.

Over last weekend, the women’s club ice hockey team traveled to to finish out our season in a three day tournament. We went into the tournament undefeated – our record was a whopping 1-0-0, with the lone game being a 5-1 victory a few months before. Our record after the tournament was .

Wice, as it is known among the players, has traditionally been a small team. Established in 2001, the team has had fewer than 10 players in each of its seasons until this year – still more than any other women’s college team in , by virtue of being the only one. Unlike the men’s team at , Wice does not require tryouts to make the team – if you want to play, you’re in, regardless of skating ability or familiarity with the game. So on one hand, the team has players like Captain Cayley Tullman and Alternate Captain Alice Bitzer, who have been playing hockey for years, including high-level high school hockey. On the other, there are players such as myself, who could count on one hand the number of times they’ve skated before joining the team.

This year, the interest in Wice exploded. The team now has 22 players, most of whom have never played hockey before. For women’s hockey – especially for club hockey or even rec league hockey – that’s an extremely large team. The referees, linesmen, and even opposing teams were often in disbelief at how large our team was, and that all but one of the players were undergrad. With all the new players, Wice is like an expansion team in the – we’ve just started icing a full team and earning respect, but there’s still improvement to be had.

Every season, Wice travels to a hockey tournament to end the season. Last season, it was to play the ’s club hockey team in a three game series. This season, it was to take part in a multi-division tournament. We were in the Pepsi Division, the beginner division. 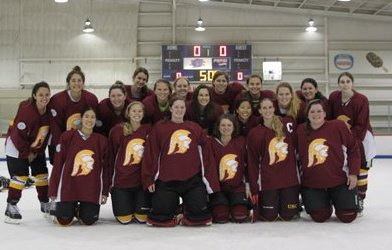 Our first game was at 9:45pm, after a long day of travel that involved flying into Seattle and then driving to Vancouver (when you’re checking 20 bags of hockey gear in at the airport and then having to put them in rental cars, you tend to have to start travelling earlier than normal). We managed a 2-1 win off of a strong performance by our goalie, Katy Ricci, and two goals by our captain.

Alas, that would be our first and last win of the tournament. The next day, we lost our first game 8-1 – which was actually the best performance a team had against that team, as they had won their other two games 9-0 – and our second game 4-1 against a team that had won their previous game 11-0. Losing, in a word, sucks. I ended up being a -2, and there’s no worse feeling than being out on the ice and not being able to prevent the other team from scoring a goal. Missing a pass, being checked, being slew-footed by your own teammate, whiffing on a shot right in the slot – nothing feels as bad as seeing that puck slip behind your goalie, especially if it was on a shot by the person you’re supposed to be defending.

Likewise, there’s no better feeling than seeing a teammate score a goal, especially their first goal (jury is out on scoring a goal yourself, because I have yet to actually do that). One of our wingers – who had just joined the team this semester – stole the puck high in the offensive zone after everyone else had given up on it, and got off a shot on goal. Five hole and in. It was her first goal, and you could see her smile all the way across the rink. She was jumping up and down on the ice like a little kid. We were still losing something awful, but that didn’t matter in that moment.

We ended up placing third in our division despite a .333 record, as the two teams we lost to were the two best teams, playing each other in the championship game. While it would have been nice to get more than one win, the experience of playing in a hockey tournament is invaluable. I learned more about hockey in that 24 hour span than I had in a long time. I learned that intercepting or even blocking passes is a hell of a lot harder than it looks. I learned that players hop over the boards instead of going through the doors because the doors are so damn hard to open. I learned that the refs and linesmen are actually nice guys who like to chat with the players during games. I learned that getting questionable pizza before a game is a bad decision. I learned that the long change is a hell of a lot harder to make than the normal change. Most of all, I learned that just because women’s hockey doesn’t allow contact doesn’t mean that you won’t get hit.

Not only was traveling to for a tournament fun on its own merits, it also afforded me a chance to see the city’s hockey madness for myself, a born-and-raised Californian. While is certainly all about the Sharks, there’s still a sense that it’s a smaller sport compared to baseball and football. Not so in .

Within the first five minutes of driving across the US-Canadian border, we spotted a Canucks car flag. Having been in Los Angeles – the home of the Lakers car flag infestation – a mere six hours earlier, it was a bit of a shock to see car flags NOT sporting the signature purple and gold of the Lakers. As we drove closer and closer to the city limits of , the car flags multiplied. It was like driving into a hockey-mad version of , with less smog, more bridges, and about the same amount of traffic. 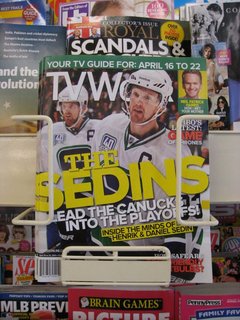 One Vancouverite I talked to equated Canucks hockey fever with that of football. On gamedays, certainly, but I’d say the Vancouver-wide obsession with the Canucks goes a bit further than that. Every tourist-y shop I visited had an entire section dedicated to Canucks memorabilia. I can not tell you how many official Canucks neck pillows I saw. On Saturday, you could not walk around the city for more than five minutes without spotting someone in a Canucks jersey – and that day the Canucks were playing the Flames in , so it wasn’t like those people were going to the game later. The front page of every paper was about the Canucks or hockey in general. Hell, even the local TV guide featured a giant picture of the Sedin twins on the cover.

Saturday night, the team went out to dinner in Gastown to celebrate the end of the season (as I learned from a placemat at "the original Old Spaghetti Factory in ," Gastown got its name from an old saloon owner whose nickname was Gassy). Every single TV was turned to the Canucks-Flames game. Every single one. In San Jose, while a lot of the TVs would be turned to the Sharks game, there might have been a few TVs dedicated to baseball games, one or two to basketball, with another perhaps being generic ESPN, depending on where you go. Not so in . There were multitudes of people waiting in line to get into popular pubs and clubs who were wearing Canucks jerseys. While it is not uncommon to see people wear Sharks jerseys on gamedays in , rarely have I seen them being worn for away games. And while I admittedly have a rather limited frame of reference, in my experience seeing people wearing Kings jerseys in not going to the game is like seeing Bigfoot, or a Sharks player while he’s on LTIR.

is a Canuck-mad, hockey-mad city. Not to knock the good fans of , but it’s an entirely different culture up there. You tell people that you’re there for a hockey tournament, and it’s treated as something perfectly normal until they find out that you’re from . Instead of hockey still being considered something new and a " thing," it is THE sport in the area.

Visiting , especially so close to the playoffs, was a great experience. I just wish that I was there when the fans found out that they were playing the Chicago Blackhawks in the playoffs.