Complimenting Each Other’s Skillset, Vlasic and Demers Will Be Key Players Against Detroit

Share All sharing options for: Complimenting Each Other’s Skillset, Vlasic and Demers Will Be Key Players Against Detroit

During the 2011 playoffs however, its been just the opposite.

After feeling slow during portions during his 2009-2010 rookie campaign, Demers embarked on what he described as the best offseason he has ever had. Working with San Jose Sharks strength and conditioning trainer Mike Potenza, Demers personalized his offseason routine to cut down on the weight that he felt made him less effective than he wanted to be at the NHL level. It emphasized a stronger core and legs, traits that would allow him to become faster and more mobile on the rush.

Something that he saw was paying off dividends for another current Sharks defenseman.

"I found that I was a little behind the game here and there. I wasn't heavy by any means, but I wanted to get down to Dan Boyle's weight," Demers told Fear The Fin earlier this year. "I played at about two hundred last year, this year I'm around one-ninety. I feel a lot better. It's allowed me to improve at getting away from some guys."

The Sharks' young defenseman has scored two goals this postseason, both on smart decisions off the puck in the offensive zone. The first came in game four when Demers joined the rush and drifted to the front of the net, receiving a precise backhand pass from Logan Couture. Demers pumped a shot home to beat a defenseless Jonathan Quick, who was clearly surprised at just how quickly Demers had found an open seam in the Los Angeles defense.

Demers' second goal, which came in a series clinching game six, saw him move to the top of Quick's right circle while the Sharks' third line controlled play low in the Kings' zone. Demers would give the Sharks a 2-1 lead on a wicked wrister that beat a goalie who had been just nothing short of phenomenal for five periods in a row.

Two goals on two plays where the young, but savvy, Sharks defenseman had jumped into the play and made an opposing team pay.

You can thank Mike Potenza for those.

The two goals scored by Demers are good for third in playoff goal scoring for defenseman, putting him amongst elite company like Duncan Keith (4 G), Shea Webber (3 G), Drew Doughty (2 G) , Brian Rafalski (2 G) and Pavel Kubina (2 G). Not only is this impressive for comparisons sake, but also because of how far Demers has progressed in just one year of NHL play.

Something that Sharks Head Coach Todd McLellan was quick to compliment.

"Obviously, Jason has that offensive flair if you will," stated McLellan. "He's found a way to gain a little more courage on the ice to make plays. They're less risky plays, but they're smarter plays."

Demers has truly flourished, but not all the praise for his development can be heaped solely on his shoulders. In order for him to be able to shine offensively there needed to be a veteran player responsible enough to protect the defensive end with four skaters in the opposing zone.

At the beginning of the season that was Kent Huskins. Seeing bottom pairing minutes, the duo was the lone bright spot on a Sharks blueline that had a propensity for getting scored on early in the year-- on November 4th, a full month into the season, Huskins and Demers had yet to be on the ice for an 5 on 5 goal against.

But as the season progressed, and with it Demers' development, it became clear that more responsibility could be placed onto his 22 year old shoulders. Demers was slowly but surely becoming a bigger and bigger part of the blueline, a player that you could no longer leave on the bench in crucial situations.

Oddly enough that veteran player happened to be a young man himself.

Enter 24 year old Marc-Edouard Vlasic. Tasked with difficult situations for the vast majority of his time spent under Todd McLellan, Vlasic was the perfect counterpart for a burgeoning offensive talent such as Demers. Defensive zone draws, top line opposition, gargantuan minutes on the penalty kill-- you name it, Vlasic has done it.

As they say, knowing is half the battle. And when it comes to Marc-Edouard Vlasic, Demers knows he has a partner he can count on in his defensive zone.

"I think we have pretty good chemistry," Demers said of Vlasic. "He does give me free reign to go up as I please and I encourage him to go too because he does have an offensive part of his game as well. It's been fun. I can roam around a bit knowing he's going to be back there."

Todd McLellan has always trusted Vlasic, and has always seen the potential for greatness in Demers-- this much is certain. But it wasn't until midway this season, when Demers' play had improved and his former partner Kent Huskins went down with injury, that McLellan decided to use the two together. It was a calculated risk considering their age, one that was able to be taken with San Jose struggling up until mid-January. It was a case of throwing two young players into the fire together to see if they could handle the heat.

Since then, the coaching staff hasn't looked back.

"They've done a tremendous job," said McLellan about the pair. "They found each other about halfway through the season and became a steady pairing. I thought they were very important in the first round as far as our success went." 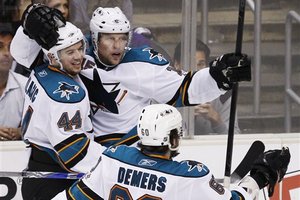 It's rare to have such a young defenseman serve that type of role for a playoff team, but it's even more uncommon to see those player as some of your ice time leaders; Vlasic is second to only Dan Boyle, contributing 21:26 minutes per game. Consider the fact that Vlasic has played just 35 seconds all series on the power play, and you're looking at a player who played an exorbitant amount of minutes in tough situations and still managed to put up a +2 rating in the first round.

For whatever reason Vlasic seems to consistently go unnoticed by many around the league, including some here in San Jose. Vlasic doesn't level big hits, he's not the most gifted offensive force. But despite all of those old-timey and antiquated ways of analyzing defenseman, Vlasic has proved to be a commodity that every team across the NHL craves.

"Vlasic is very underrated," McLellan stated point-blank. "He doesn't get enough credit for his ability to defend against some of the league's top skill players."

In fact, going unnoticed might be the best gauge of Vlasic's success; his game thrives in that he puts himself in a position where he simply makes the right play, even though the right play gets unnoticed most nights. He's rarely out of position, and few are better at using the stick to wrestle possession away from opposing players.

The same can be said about Demers, whose play this year all but erases the angst of the San Jose faithful when the Chicago Blackhawks decided to match Doug Wilson's offer to restricted free agent Niklas Hjalmarsson. Many believed that the young Hjalmarsson was the missing piece to set up San Jose's defensive corps for the present and into the future. However, with the 22 year old Demers and 24 year old Vlasic proving that they're ready for the main stage, and Hjalmarsson struggling mightily during his 2010-2011 campaign with Chicago, the Sharks are looking more competent on the backend with each passing day.

Coupled with the fact that both players are signed through the next two seasons at bargain basement levels, accounting for a mere $4.35MM cap hit between them, it's safe to say that the Sharks blueline has a youthful upside that will offset the increasing ages of players such as Dan Boyle and Douglas Murray.

An upside that sets the organization up for years to come.

The two players seem to have found a home together on the Sharks' second defensive unit, complimenting each other's different skills to form one of the best young pairings currently left skating in the NHL Playoffs. As the Sharks look to the second round for a matchup with Detroit, they'll continue to look to Demers and Vlasic to contribute, whether it be in the form of a Demers goal or a Vlasic stick check.

"I thought they were very important in the first round as far as our success went," claimed McLellan.

They'll likely be instrumental in the Sharks' series against Detroit as well. Demers, in only his second postseason, seemed to be ready for the opportunity to face the Datsyuk's and Zetterberg's of the world.

"I'm excited for the challenge, and I'm sure Marc is too."