In our article editor we have a collection of Getty/AP photographs that we can use for stories.

One thing that always stands out to me is the awkward poses Sharks Head Coach Todd McLellan gets caught in during locker clean out day. There are currently forty one photos of McLellan available from his time with the Sharks, five of which are from locker clean out day. AP Photographer Paul Sakuma (who does excellent work) always manages to capture McLellan in an awkward pose.

I'm sure they are meant to represent sadness, frustration, and disappointment, but they end up being a strange collection of photographs that you can never really use in a legitimate story and don't represent anything other than a man being caught in the act of rubbing his face. 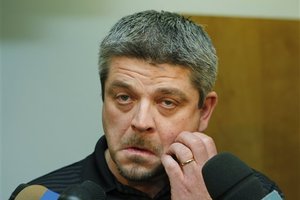 McLellan after the 2009 loss to the Anaheim Ducks 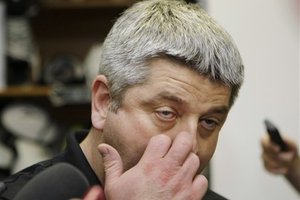 McLellan after the 2011 loss to the Vancouver Canucks.

At any rate, since the offseason is upon us, I guess it makes sense to start our analysis with the most successful Coach in franchise history.

There's no doubt McLellan should be brought back behind the Sharks bench next season. He's an excellent orator, both to the media as well as the players, and has a system that has produced one Presidents' Trophy and two Western Conference Finals appearances in three years behind the bench. His resume speaks for itself, and frankly, any rumbling of a potential coaching change should be met with a militant refusal to even enter the conversation.

Two of the three areas where McLellan has been most criticized are just as much a product of the roster he has to work with as they are a product of his decisions. The three biggest tweaks many would like McLellan to make are a) reduce Boyle's minutes b) play his fourth line more and c) be less reliant upon his number one goaltender.

Boyle, who is turning thirty five this summer, has received gargantuan minutes the last two seasons, clocking in at second in 2010-2011 and fourth in 2009-2010 league-wide. The rub to that of course is that a lot of Boyle's minutes come on the power play, which are definitely easier minutes on the legs than those which come at evens and shorthanded-- he's clocked in at 4:17 per game over the last two years.

This can be fixed by bringing in a legitimate number two defenseman, something that San Jose has been looking at acquiring for quite some time now. Having that type of player on the roster allows McLellan to ease the burden off of Boyle throughout the year, keeping him fresh for the postseason. With all of the blown third period leads San Jose sustained this season, I would assume that it will be (once again) the area of most importance during our lengthy offseason discussion.

The lack of minutes for the fourth line is born of a couple things-- for starters, San Jose's struggles throughout the first half of this season forced them to play must-win games from January to April, relying on their top line players to achieve those results. Furthermore, with the ability to roll three dangerous lines for that portion of the year, minutes could be dispersed throughout those top nine forwards in order to ease the burden off of players like Thornton, Marleau etc. Coupled with varying results from the likes of Scott Nichol, Jamal Mayers, Jamie McGinn, Ben Eager, and any other Worcester player that filled the void, there wasn't a lot to tinker with on that fourth line.

This can be fixed by roster adjustments as well. Andrew Desjardins and the aforementioned McGinn looked dangerous together at the end of the postseason, providing good energy for the club and generating some notable scoring chances as well. A full 82 game season from them could provide enough in the way of tangible results to justify an increase of ice time. Furthermore, obtaining a strong defensive forward who can kill penalties is something that would allow that fourth line to be trusted in more circumstances.

We mentioned bringing in a lower line forward to kill penalties last offseason, talked about it on our most recent podcast, and will have a much more in-depth look at it on Monday morning. That's an area of the game where San Jose could truly benefit this offseason, easing the minutes off of the top line forwards and creating a situation where the Sharks have more options available to improve a penalty kill ranked 24th in the League.

The third area is the tendency to ride goaltender all season. Antti Niemi started 34 consecutive games from January 15th through April 4th, and Nabokov's playing time in San Jose has been well chronicled. Niemi's games played streak came at a time when he was nearly forced into the position of course-- Antero Niittymaki was out with injury, Thomas Greiss was overseas, Al Stalock was injured on February 5th, and Niemi was playing some of the best hockey of his career-- but once Niittymaki came off the IR, McLellan stuck with Niemi and continued to give him starts without working Niittymaki into game shape.

Historically, balancing out starts throughout the course of the year is something that McLellan hasn't found especially concerning. Much like the situation with Nabokov, the organization feels as if Niemi plays more effectively the more games he plays. With Niittymaki as a suitable backup going into next season however, I wouldn't be surprised to see that methodology change, especially down the stretch. Niemi's play during the postseason, while not as bad as his 3.22 GAA and .897 SV% indicate, wasn't anything to write home about. Keeping two goalies prepped and ready for postseason action is clearly something that is more advantageous than just having one.

In summation, the three biggest issues many have with McLellan are a product of his roster as well as his approach. Bringing in a legitimate number two defenseman and acquiring a lower line defensive forward are the two biggest keys for San Jose this offseason, areas that will make McLellan's job much easier in 2011-2012.

McLellan is one of the best coaches in the National Hockey League right now.

Even if his locker cleanout day pictures say otherwise.