Although news of the Atlanta Thrashers relocation to Winnipeg has been in the works for weeks now, today was the day the deal finally got the official christening from the League brass.

Per The Atlanta Journal Constitution:

True North Sports and Entertainment, the Canadian group that has been negotiating to buy the team since mid-May, made formal announcement of the move at news conference in Winnipeg  at 12:20 p.m.

Lawyers worked through the night on the transaction, with the last piece put in place at mid-morning Tuesday. Commisioner Gary Bettman told reporters he took a conference call with the principles at 4:30 a.m. (EDT) Tuesday.

Once the Board of Governors approves the sale of the team on June 21st Winnipeg will officially have a team during the 2011-2012 season, their first since the Jets left in 1996.

In terms of realignment of the divisions, the San Jose Sharks will not be effected by a franchise in Winnipeg next year. The organization in Winnipeg, which has yet to receive a name, will play in the Southeast Division during the entirety of 2011-2012. The League will wait one season to realign the divisions, in no small part due to the continuing uncertainty in the Phoenix market.

The Detroit Red Wings have long petitioned the NHL to move to the Eastern Conference due to the fact that they are an Eastern Time Zone team burdened with travel and start time issues. Most reports indicate Columbus would be the team making the move to the East however, with Nashville also being a possibility.

Once Winnipeg makes the transition into the Western Conference in 2012-2013, the possibilities for a newly aligned Pacific Division include two teams-- the Vancouver Canucks and Colorado Avalanche. Colorado seems like the best bet due to their proximity, as well as the fact that moving Vancouver out of a Canadian division makes little sense from a marketing standpoint. With Winnipeg being such a small market as is, television contracts with the Canadian broadcasting companies would be much more lucrative for the franchise if they included as many Canadian matchups as possible.

It remains to be seen what the team name will be for the new franchise in Winnipeg. Although the Jets would be a nice nod to the city's professional hockey roots, there have been many reports that indicate it will not be used. True North Sports and Entertainment owns the Manitoba Moose, Vancouver's affiliate in the American Hockey League, and using that namesake in the National Hockey League would seem to be a seamless transition. True North has poured a lot of capital into developing and branding that logo, making it a solid choice for the new organization. 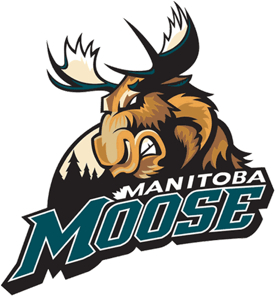 The teal is a nice touch.