Every year July 1st comes and goes and the San Jose Sharks stand on the sidelines. A brief perusal of the Major Transactions page on the Sharks main website reinforces this qualitative observation-- Antero Niittymaki is the only signing during Doug Wilson's tenure as General Manager that made the list, and only one other player (Scott Thornton in 2000) was deemed important enough to be included as a major transaction on free agency's opening day.

The children's book "Where's Waldo?" could easily be changed to "Where's Wilson?" when it comes to July 1st and no one would notice.

The San Jose Sharks are a team that has always built from the bottom up, acquiring players via trade and from the NHL Entry draft. I don't think it is a reach to say that there are one of the stingiest teams on July 1st across the League and have spent the least amount of money on July 1st in comparison to the rest of the NHL. Judging by the vast amount of dollars thrown around on this day it is probably for good reason. San Jose has avoided the long-term cap crunching commitments that can bury teams, avoiding the overpayment plague by looking for answers within.

This offseason though, things may change. The Sharks head into July 1st with $8.38 MM to spend on four forwards and a defensive defenseman. A small amount of those cap dollars will be eaten up by the likes of Benn Ferriero, Jamie McGinn, John McCarthy, and/or Frazer McLaren (who all received qualifying offers earlier this week), but there's no doubt that the Sharks have a lot of money to play with in free agency as they attempt to improve a roster that is already looking like it will be one of the best in the NHL next year.

So who is the player who can help San Jose the most? 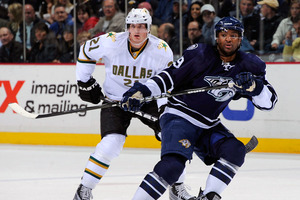 Joel Ward tops my free agent list because he is precisely what the San Jose Sharks should be looking for in the opening hours of free agency-- a hard minutes player who can put in an exorbitant amount of time on the penalty kill. With Scott Nichol and Jamal Mayers leaving the team next year, Patrick Marleau and Joe Pavelski leading the team in SH TOI, and the penalty kill posting a concerning 79.4% success rate last season, Ward would help patch up a lot of holes San Jose has on its roster.

Ward logged 1:52 on the 5th ranked Predators penalty kill unit last season, and has been a big minutes shorthanded forward for years. Furthermore, his performance at even strength is exactly what you want out of a lower line player. Ward faced the hardest quality of competition on the Preds last season, had the second most difficult zone starts, and had the best CORSI relative to his quality of competition. In other words, he's a defensive mastermind who would more than be able to contribute to a checking line role.

Ward had a down year offensively however, only posting ten goals and nineteen assists with Nashville. It was his worst offensive season in his career due in part due to his 6.4 S%, but that isn't his biggest draw as a player-- Ward would be brought in to prevent goals, not score them. With that being said, playing on the third line with Joe Pavelski and Winger X would allow the Sharks to roll out an excellent defensive specialist third line with scoring pop, equaling if not exceeding the production they received from their third line last season.

The unfortunate part of Ward's circumstance in relation to San Jose is that he is bound to receive a hefty payday from some trigger happy General Manager who saw his 7 goal 6 assist performance during his 13 playoff games with Nashville and believes Ward will score 30 goals next season for his team. Whether or not he prices himself out of the market is pure speculation, but here's hoping that cooler heads prevail and his asking price is in a range Doug Wilson is comfortable with.

Role: Plays on the third line with Joe Pavelski while contributing heavily on the penalty kill.