Share All sharing options for: San Jose Sharks Have Cap Space To Work With During 2011 Offseason

The San Jose Sharks will have a lot of cap space to work with this offseason.

It's the first time in awhile the organization could really say that with any degree of confidence.

With seven forwards, five defenseman, and two goaltenders left under contract from the 2011 playoff roster, the Sharks have a grand total of $51.825 MM committed to their opening night roster to begin next season. That leaves a minimum of five forwards and one defenseman needing to be brought into the fold, an easily obtainable goal for the organization in their pursuit to land a notable name to improve their roster for next season.

And with reports from Pierre Lebrun indicating that the salary cap could rise to $63.5 MM, the amount of options available for San Jose is stronger than it has ever been.

• Daly said next year's salary cap could be as high as $63.5 million. The exact figure will be announced in late June.

For our purposes we will assume the salary cap increases to $62.0 MM per year-- it is a conservative estimate used in part to examine just how comfortable the Sharks will be if they wish to retain the majority of a roster that went to the Western Conference Finals this season. 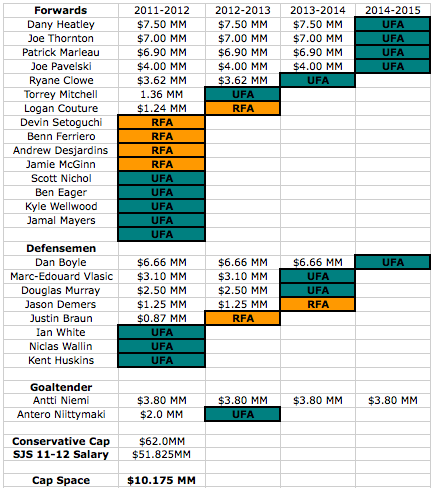 With our conservative estimate of a $62.0 MM cap in place the Sharks come out with roughly $10.175 MM in cap space for the upcoming season. That could increase to $11.675 MM if Bill Daly's high-end estimate is met.

The big decision this offseason will be whether to re-sign Ian White and Devin Setoguchi, two players who were instrumental in San Jose's first two rounds against Los Angeles and Detroit. We'll have market comps for both of these players next week, but for the sake of our discussion today let's assume they net around $7.0 MM between them during 2011-2012.

That leaves roughly $3.175 MM left in available space left to sign four forwards who would round out the bottom forward lines, an average of $793,000 per player. Pending RFA's such as Andrew Desjardins and Jamie McGinn should bring in a contract approaching the League minimum due to their performance and importance during the regular season last year; that League minimum salary will be $525,000 according to the CBA.

The rest of the roster could either consist of bargain bin free agents and/or a smattering of players who are pending UFA's this season.

In other words, the Sharks could quite easily ice a roster that is comparable in skill to the one that went to the Western Conference Finals this season. And while they would still be lacking that number two defenseman they likely need in order to push them over the hump, there is no doubt that the team would yet again be a Stanley Cup contender from the onset of training camp.

Obtaining that number two defenseman is where things get tricky of course. San Jose would likely have to make a decision between either Ian White, Devin Setoguchi, Ryane Clowe, or Joe Pavelski in order to accommodate the salary a legitimate number two defenseman would command, let alone the amount of talent that would have to be given up if said defenseman was acquired via trade.

However, no matter which way the numbers are crunched, the San Jose Sharks have the ability to make a big splash this offseason or stand pat and rely on their younger players' progress to improve the roster from the floor up. And while obtaining that number two defenseman is something I feel is the biggest priority for the organization in order to give them a legitimate backend that can hold a third period lead, there's no doubt that the team is sitting pretty right now in respect to their ability to construct a Cup contending team.

In the modern NHL, salary flexibility is just as much of an asset as a promising prospect playing in the American Hockey League.

And for the first time in a long time, San Jose has just that.