Share All sharing options for: Dany Heatley Buyout: A Study In Offseason Irrationality

For hockey fans slogging their way through the sleepy summer months, no website is trusted more than CapGeek.com. It is the go-to place for salary information, hypothetical roster building, and potential lineups. It is the Rosetta Stone when it comes to the common fan's attempt to understand the monetary side of the game.

Matthew Weust, who runs the website from his home in Nova Scotia, has accrued so many sources over the years that it has become commonplace for him to break signings before the MSM does. He's even been brought on to write for TSN during the high profile contract months (free agency and the trade deadline), offering his perspective on where a specific team stand in regards to their salary structure and ability to acquire talent.

Think of CapGeek as EA's NHL 2011 Be A GM Mode. Every conceivable roster at your fingertips, with buyouts, trades, free agents, and offer sheets all at your disposal. For some it's a tool to use for the greater good-- tweaks here and there to improve your favorite team, a trade here or there that makes sense for both clubs partaking in the festivities.

For others it's a highway to hedonism, as an analysis of the most popular buyouts over the last week will tell you. 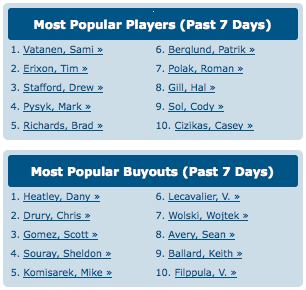 The list of names here makes a lot of sense. Wojitek Wolski, Chris Drury, and Sean Avery all play for the New York Rangers-- with the Brad Richards sweepstakes in full swing since Dallas announced they would not re-sign him, the majority of Rangers fans are trying to find a way to break free of the shackles known as Glen Sather's contracts. Godspeed folks. Godspeed.

Sheldon Souray of the Edmonton Oilers is buried in minors and likely won't play in Edmonton ever again. Scott Gomez had a horrible season, posting 38 points and a -15 with three years left on a contract that pays him $7.3 MM per year. Komisarek, who has three years left at $4.5 MM per year, is a product of Toronto wanting to be active in the Free Agent market.

But wait, Dany Heatley? Former 50 goal scorer Dany Heatley of the San Jose Sharks, a player who finished fourth on the team in points this season, scored 39 goals in his first year with the team, and sees a healthy amount of time in the Sharks top six forward group?

Yes, that Dany Heatley. Buoyed by the fact that Heatley was largely ineffective for much of the Sharks 2011 postseason, posting three goals and six assists in eighteen games, the hounds have come out of the woodwork. Sporting a contract that has three years left and accounts for $7.5 MM of cap space per year, San Jose's ability to improve their blueline and shore up their penalty kill is slightly hampered by what some have called an albatross of a contract.

However, with Heatley on the books the Sharks still have a lot of flexibility heading into the offseason. At the very least they're looking at $10.175 MM in cap space to sign six skaters, four of which will be of the bottom line variety.

There's no doubt that Heatley has been a disappointment in the postseason during his two years with the Sharks. Brought in for his ability to score goals, Heatley has amassed a grand total of five in thirty two games played, an average of 12.8 when applied to an 82 game season. That production (or lack thereof) is what is fueling these buyout fires.

Further kindling is provided by the fact that Heatley's contract contains a No Movement Clause. The clause caused a deal sending him to the Edmonton Oilers in the summer of 2009 to be nullified after Heatley denied the trade, and makes moving him for the best return an unlikely possibility considering the organization would not be able to negotiate with all 29 potential trade partners.

But a buyout? Throwing in the towel that quickly despite the news that Heatley was playing with a broken left hand and a high-ankle injury during the 2011 postseason, dealt with a torn groin during the 2010 postseason, and underwent surgery this past offseason which caused rehabilitation issues during the entirety of this year?

It doesn't make any sense. For starters, this practice enact a cap hit against the team who engages in a buyout. According to CapGeek's buyout calculator, the San Jose Sharks would have a penalty of $1.6 MM next year, $3.6 MM in 12-13, $4.6 MM in 13-14, and $2.1 MM for the three years following. That is cap space being eaten up by a player who is not on the current roster-- in other words, you're allocating valuable salary resources to a player that is not helping you win hockey games.

Secondly, Heatley is still an effective player when he is healthy. While it's clear that his $7.5 MM contract is one that could shed a few unsightly pounds, he's a former 50 goal scorer who has a dangerous shot and has improved immensely on the defensive side of the ice. There is still immense value here, and even though his contract contains a No Movement Clause that would hamper San Jose's ability to get the best return for his services, there are numerous teams out there who would be willing to part with talent in order to acquire him.

Cap space is cap space. You use that cap space in order to acquire talented players. You don't shed cap space in order to acquire more cap space if it means your team would be worse off for it. Buying out Heatley would send tremors down the Sharks lines, pushing Pavelski up to the top six and leaving the bottom six forward group lacking a legitimate scoring threat. Coupled with the fact that the free agent class is a weak one, as well as the fact that San Jose has historically acquired players via trade, it sets up a situation where you would have to move more players (Pavelski, Setoguchi etc.) in order to capitalize on that cap space. Which would exponentially increase the issues of finding the ability to ice a competitive team.

The San Jose Sharks window of opportunity to win is right now. Dany Heatley, either through his play or in the unlikely event he is traded this offseason (which would bring in players that would help the team win), is going to be a big part of that.

Which is unfortunately par for the course during the sleepy summer months that comprise the NHL offseason.