Share All sharing options for: Sharks Third Line Deficiencies Are No Pressing Matter

With the dog days of August upon us, the majority of organizations across the NHL are sitting on their assets and waiting for training camp to begin before reassessing their needs. This next month may be a slow and arduous journey for many hockey fans but the ineffectual days of debating James Shepard trades will soon disappear-- when hockey is finally here and this new look Sharks team finally hits the ice, everyone will be better off for it.

Although the Delta Force approach to trade negotiations employed by Sharks General Manager Doug Wilson makes it hard to predict future moves with any degree of confidence, barring another phone call from Chuck Fletcher, it looks likely that the Sharks will enter camp with the same roster they have in place today. As we covered earlier this month, that means forwards like Jamie McGinn and Torrey Mitchell will likely be counted on to have big years on the third line. Andrew Murray and James Shepard will push for NHL jobs. Furthermore, young players such as Tommy Wingels, Benn Ferriero, John McCarthy, Frazer McLaren, and Andrew Desjardins will all get a fair shot in camp, with Desjardins practically a shoe in for the fourth line center role.

Others will also receive a chance to impress; much like Ferriero in 2009-2010, don't rule out a previously unheralded player making it to the final day of cuts or even beyond. Extending a camp tryout to a veteran player like the organization did in 2009 with Manny Malhotra is also an option that could be pursued later this summer.

Last season the Sharks started the year with a very similar type of opportunity for young players, producing mixed to below average results. Tommy Wingels, Jamie McGinn, Frazer McLaren, and John McCarthy all played in at least one of the team's first two games in Sweden; Brandon Mashinter saw time with the big club in late December and mid-January, and Benn Ferriero logged 33 games in between stints with Worcester. However, this rotating cast of players was unable to make a discernible impact on games and became the recipient of declining ice time numbers. Doug Wilson responded to these inadequacies, a six game losing streak, and an inconsistent first half by acquiring Ben Eager and Kyle Wellwood in two separate transactions on January 18th.

In essence, the third and fourth lines didn't have much of an impact on games and the ice time allocated to the top six forwards ended up as the second highest in the Western Conference playoff picture. Ipso facto, shouldn't San Jose be aggressively pursuing a third line forward right now in order to put the best roster in place to start the season?

Not quite. And here's why.

Unlike last season, the Sharks have a wealth of depth on the blueline. The acquisitions of Brent Burns, Colin White, and Jim Vandermeer give San Jose one of the deepest and most well-rounded units in the entire League. Coupled with another year of Antti Niemi and the availability of Justin Braun, San Jose should have no issues playing a tight defensive game from the beginning of the season. That strength should allow the third and fourth line to have a better opportunity to grab more ice time than they did last season, learn on the fly, and develop their skills in a sheltered environment.

Most importantly, the blueline will mask that lack of lower line depth during the initial months of the season, allowing McLellan and the front office to better understand which players are part of the long-term plan and will be roster players come spring.

The Sharks top six forward group is one of the best in the League, more so with Joe Pavelski replacing Devin Setoguchi in a full-time role. Pavelski, Joe Thornton, Patrick Marleau, Logan Couture, Ryane Clowe, and Martin Havlat can go up against tough competition and end up in the black, giving the Sharks a wide array of high minutes players who McLellan should be comfortable with in every game situation.

When the NHL Trade Deadline comes knocking the Sharks won't have to be in the running for the high value high priced players that require an arm and a leg to acquire. With over $4.0 MM in cap space they could definitely go that route if they so desire, but a pressing need for a top-six forward won't be there barring any severe injuries to the current group.

Top six? Check. Goaltending? Check. Blueline? No Czechs, but a big check nonetheless. All that remains is a third line role player, something that comes relatively cheap towards the middle of the season when sellers across the League look to restock their cupboards with prospects and picks. And as history shows us, those guys can be acquired fairly cheaply towards the end of the year:

*Term left on contract in parentheses; Prospects are indicated with a "P".

While not an exhaustive list by any stretch of the imagination, this does give some indication as to what it cost teams last season to acquire a third or fourth line player in preparation for the stretch run. Everything here indicates you're looking at a mid-tier draft selection and maybe a prospect tossed in for good measure. Outside of the Washington Capitals trade for Jason Arnott, the price being paid for players is consistent with their market value.

Centers and defenseman cost the most to acquire via trade due to their importance-- the Sharks look to be good to go on both of those fronts for the time being, especially if Andrew Desjardins delivers on the promise he showed at the end of last year. San Jose does not have picks available in the 3rd and 4th round of the 2012 Entry Draft or the 3rd round of the 2013 NHL Entry Draft, but does posses first and second round selections in both. Along with dangling prospects, these pieces will be more than enough to acquire an impact third liner at any point this year. 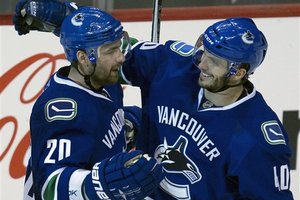 Higgins and Lapierre were good additions at minimal cost

A good template to work with is what Vancouver did last year at the deadline. Chris Higgins and Maxim Lapierre were acquired for a third round selections and below average prospects respectively, a worthy price to pay for two players who improved the team's depth up front. Higgins and Lapierre played an instrumental role in Vancouver's run to the Cup Finals, allowing Head Coach Alain Vigneault to trot out a third line that was nasty and had some scoring pop. Targeting pending UFA's should continue to be the modus operandi of the Sharks, and as Mike Gillis' savvy deals showed last season, that UFA status should cause players to go for cheaper than they would if attached to another year on their contracts.

Whether or not San Jose makes a move for a third liner now or later in the season has both upsides and downsides. I like the idea of giving the prospects a chance to make an impact on the team; this allows the Sharks front office to see which players fit in long-term and which players can be moved later in the year for a veteran roster player. With San Jose's organizational forward depth quite weak compared to the rest of the NHL, finding what pieces fit best on the team is a good forward looking policy to employ.

The downside to this is that San Jose may dig themselves into a hole like they did last season-- judging by the vast improvements on the blueline and strength of their top six however, this seems unlikely. Furthermore, when one considers the minimal cost of acquiring third line forwards, seeing how things play out until December isn't an especially risky move. Doug Wilson has stated before that one thing he took away from last season was that he waited too long to make a move-- he answered that self-critique this offseason by immensely improving the blueline and mixing up the forward group. If San Jose struggles out of the gate again, he will have a much itchier trigger finger than he did last year.

Another important factor in all of this is cap space. San Jose has roughly $4.0 MM in space right now depending on who makes the team out of camp. Due to the fact that the NHL pro-rates salaries on a daily basis, that cap space will translate into $8.0 MM by the midpoint of next season. Flexibility is key in the modern NHL, and San Jose has that in spades.

There is no doubt that San Jose should be on the lookout for any opportunities to improve their third line at some point this season. It is the one weakness the team has and needs to be addressed before the playoffs begin. But with the relatively low cost of acquiring third line wingers, veteran camp tryout invitations still a possibility, and opportunity for homegrown prospects to make the team out of camp to fill a role the team is looking for, there's nothing here that indicates the Sharks need to go out and get a third line winger now in order to be competitive in October.

Whether that move comes today* or in February, San Jose has plenty of options left to get even better before the 2012 NHL Playoffs begin.

*Considering I just threw down a 1600+ word dissertation on the subject I'm betting it does.