Share All sharing options for: Burns and Vlasic will be Sharks shutdown pairing for years to come

When Sharks General Manager Doug Wilson traded Devin Setoguchi, Charlie Coyle, and a first round selection in the 2011 NHL Entry Draft for Minnesota Wild defenseman Brent Burns, a silent cloud hung over the otherwise successful affair-- Burns was set to become an unrestricted free agent in the summer of 2012, setting up a situation where San Jose may have been looking at dealing away three prime future pieces for a one-year rental. Those concerns were silenced in early August however, as Burns inked a five year deal that would keep him in a Sharks jersey for years to come.

Subsequently, life began to sprout from the once barren landscape on the blueline.

Although pairings won't be finalized until the end of training camp it stands to reason that Burns will be paired with shutdown defensive defenseman Marc-Edouard Vlasic on opening night. Their skill sets are too complimentary, too yin and yang, to expect otherwise. Burns, a hulking 6'5 220 pound puck-moving sharp-shooting smooth-skating sonuvagun, brings an offensive mentality to the team that will emphasize agressiveness and swift puck movement up the ice.

Burns' body type and skill set harkens back to the days of the great Rob Blake in some specific ways-- although Burns' defensive awareness hasn't reached the level of the surefire Hall of Famer at this stage of his career, and the hip checks Blake dropped with aplomb throughout his career are something Burns will only deploy on occasion, the size, skating ability, booming point shot, and excellent outlet pass both defenseman are known for makes drawing a parallel between the two a natural progression for the prognosticating offseason gentleman.

And, as it turns out, Vlasic's best year over the last three seasons came with the aforementioned Rob Blake alongside him on the blueline.

As the advanced stats show, Vlasic's contributions to the team come with his tough quality of competition, high-end PK minutes, difficult zone starts, and top-end goals against numbers (especially when you consider who he is playing against). Vlasic is a consistent contender in James Mirtle's Rod Langway Award, an annual award that recognizes the best defensive defenseman in the League, and has managed to step up into a shutdown role all at the age of 24. The level he's reached defensively is one you normally see defenseman hitting in their late 20's-- to imagine he has done so before his 25th birthday is something that is quite remarkable.

Perpetually underrated by national media and local fans alike, Vlasic's game isn't one that stands out in any monumental way. He's quiet in the corners, a non-factor offensively, and a mid-range skater who doesn't carry the puck out of his own zone extremely well. If you're looking for highlight hits and scorching shots from Vlasic it makes sense that he would fly under the radar-- there's nothing here that screams for attention, which in the case of Vlasic, is a superb quality to have in a quietly effective shutdown defenseman. Adept with the poke check, pushing puck carriers out of the middle of the ice, and breaking up odd-man rushes, Vlasic's game is one a photographer like Ansel Adams would cherish if he was a sports aficionado-- monumental vistas, serene rivers, gorgeous landscapes, a quiet dignity.

Most importantly, nary a man-made red light in sight.

Where Burns' primary weakness is his defense, Vlasic thrives when placed in the defensive zone. And where Vlasic's primary weakness is his offense, Burns' contributions in this area threaten to cause a few more power outages at HP Pavilion during the 2011-2012 campaign. Yin and yang indeed, especially when further research reveals their differing views on the subject of body art. 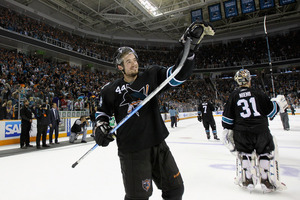 "I got a Hardy Boys Henna tattoo once, but it wasn't for me."

It may be too early to make sweeping predictions, but expectations for a Vlasic-Burns pairing are one of the few things that have managed to keep this lowly blogger from going Coco-loco after being stranded on the deserted island known as the August offseason. Maybe it's the rancid coconut juice talking here, but a pairing that resembles the duo of Shea Weber and Ryan Suter in Nashville seems like a possibility if everything breaks right.

Burns and Weber both possess booming shots and great offensive instincts, while Suter and Vlasic provide the quiet defensive play that allow their more offensively gifted partners to succeed (although Suter is clearly a more talented offensive presence than Vlasic). Burns and Vlasic won't be counted on to shoulder the massive minutes load that Weber and Suter see with the Predators, nor will they be as instrumental to the success of their team; however, the groundwork is definitely set for these two young Sharks to become a part of one of the best young defensive pairings in the entire League, and one that many across the NHL will begin to take notice of as the season progresses.

With Vlasic and Burns providing a perfect complement for one another, 2011-2012 has all the makings of producing a more productive offensive year for Vlasic and a more responsible defensive year for Burns. Ever since San Jose lost Rob Blake to retirement in 2010 they've been looking for a number two d-man, but in all actuality, they have also been looking for a physical partner that can shoot the puck to pair with Vlasic. It was with Rob Blake that Vlasic truly bloomed as a premier shutdown defenseman in the NHL; Burns skill set matches those needs perfectly.

With Burns locked up for six years, and Vlasic in teal for two more at a superbly valued $3.1 MM per, this season won't be the last time we will have the opportunity to see Burns and Vlasic patrolling the Sharks blueline.

Something that will be a welcome addition for an organization which had been looking for that final piece for far too long.