With the 2011-2012 season set to begin on October 8th, Fear The Fin will be partying with Miss Cleo and previewing the Sharks roster in the weeks leading up to opening night. Today we begin with what is expected to be the Sharks top line of Joe Thornton, Patrick Marleau, and Joe Pavelski. 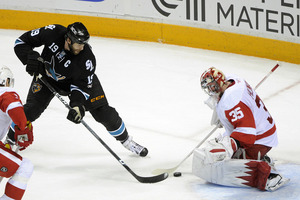 Following a year that saw him transform his game from offensive specialist to two-way shutdown center, Joe Thornton's 2011-2012 season doesn't have too many question marks going into it. He's still good for 20 goals and 50 assists a season, will receive oodles of power play time, and will help chip in on the penalty kill unit. An every day player who has only missed five games during his career as a Shark (two for suspension, three with injury), Thornton's role as team Captain is one that he has stepped into admirably despite the fatigued and overblown questions of whether or not he is capable of stepping up when it matters most.

Strong along the boards and a master at finding passing lanes where none seem to exist, Thornton will be expected to lead the charge once again for a Sharks offense that finished sixth in goals per game and second in power play efficiency last year. The addition of Joe Pavelski onto the top line gives Thornton another right handed shot to play with, something he's found great success with over his career with Jonathan Cheechoo and Devin Setoguchi. The fact that both Marleau and Pavelski went 1-2 in the shots department last season for San Jose, finishing with 282 and 279 respectively, just means that there are going to be even more options for Thornton as he controls the puck behind the net.

With all the leaps Thornton made in his overall game last season, the biggest question for him will be whether or not he is capable of cracking the point per game mark again. Last season was the first year he failed to do so, in large part to his commitment in the defensive end of the ice and some inconsistent play from his wingers. With Pavelski and Marleau on his wings the opportunity will be there for Thornton to put up a point per game-- we think he gets there. 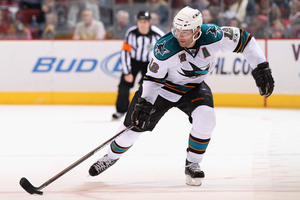 While most goal scorers over the age of 30 years old see a decline in their goal scoring numbers, Patrick Marleau has bucked (pucked?) the trend to the nth degree. Putting up a career high 38 goals in 08-09, and following up with another career high 44 goals in 09-10, Marleau settled in for another extremely successful 37 goal campaign in 10-11. One of the primary reasons Marleau has been able to keep scoring goals at a breakneck pace is due to his skating ability, which has showed no signs of slowing down and continues to be one of the biggest assets to his game.

A streaky goal scorer in every sense of the word, Marleau is prone to bouts of drought that are followed by his name appearing on the scoresheet at a ludicrous rate. A textbook example of this would be the 2011 postseason, where a scoreless binge through the first six games of the Detroit series culminated in Marleau scoring the game winner in game seven and notching a point in every game of the Western Conference Finals where he finished with 4 goals and 3 assists. Expecting this type of roller coaster ride in the goal scoring department to subside is probably unreasonable at this stage of his career; as long as Marleau cracks the 30 goal mark and continues to get hot and carry the team for prolonged stretches, his season should be considered a success.

The biggest question for Marleau heading into the 2011-2012 campaign is two-pronged and relates in part to Joe Pavelski. Both Marleau and Pavelski led the team in shorthanded ice time last season and fared fairly poorly in the goals against department at 5v4. The addition of Michal Handzus should help ease the burden off Marleau in this regard, and with other penalty kill help incoming, our hope is that the top line sees less time shorthanded in the coming year.

The second question is whether or not Marleau can revamp his defensive play and return to the Selke contender he was in 2009-2010. Following the general progression of the team, Marleau was -19 in the first 45 games last season and was a +16 in the last 37 games. That's a phenomenal turnaround. Coupled with the increased defensive depth San Jose has this season, and playing alongside Pavelski and Thornton on what is essentially the Sharks best defensive forward line, the stage is set for Marleau to finish in the black during 2011-2012 and make another run at the Selke. 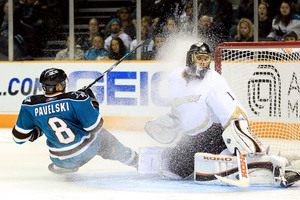 Consider this-- last season Pavelski put up one of his worst shooting percentages of his career (7.1%), played on the third line for a large portion of the season, and struggled defensively despite the fact that has historically been one of the strongest parts of his game. And yet, he still put up a career year in the points department and finished tied for third amongst forwards in +/-.

If you're looking for a player who is going to surprise a lot of people this season with his point totals, especially in the goal scoring realm, Pavelski is your guy. If he sticks on the top line with Thornton and Marleau, a 30 goal season is definitely in the cards considering his propensity for putting pucks on net (279 last year, second on the team). Furthermore, the fact that the addition of Brent Burns moves Pavelski off of the point on the power play and up into the much more fortuitous forward position means that Pavelski should continue to put up points even if his PP TOI (3:23 last year) drops.

Pavelski has always been a special player, a guy that has been appreciated not just for his clutch goal scoring ability but also for how he approaches the game between the ears. Although his puck dumping skills don't ever show up in the boxscore following the game, there will be multiple times throughout a game where you'll see Pavelski drop a perfectly placed chip shot into the corner and go retrieve it himself. It is things like that which should help the top line grind teams down in the offensive zone in the cycle game, an area of play where both Thornton, Pavelski, and Marleau should thrive.

The biggest question for Pavelski heading into the 2011-2012 season will be, much like Marleau, whether or not his defensive play can rebound from a roller coaster performance last season. In the first 45 games of the season Pavelski was a -12 and posted 0.73 points per game-- in the last 37, he was a ludicrous +22 and put up 1.05 points per game. Cutting down their shorthanded ice time, where Pavelski and Marleau finished worst on the team in the goals against per 60 minutes category, would go a long way towards keeping their legs fresh throughout the year.

Pavelski is easily the player we're most excited to see next season. On the top line with Thornton and Marleau, his offensive opportunities will come in spades and his propensity for putting up big shot totals will come in handy with Thornton dishing the puck. The cycle will be deadly with Pavelski replacing Setoguchi, and a return to normalcy in his shooting percentages make a 30 goal year a definite possibility.

With a few snow showers thrown in for good measure.