With the 2011-2012 season set to begin on October 8th, Fear The Fin will be partying with Miss Cleo and previewing the Sharks roster in the weeks leading up to opening night. Today we continue with what is expected to be the Sharks second line: Martin Havlat, Logan Couture, and Ryane Clowe. 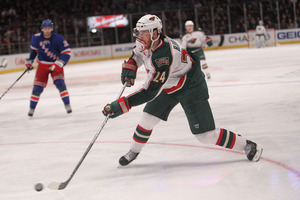 Acquired from the Minnesota Wild on July 3, 2011 in exchange for winger Dany Heatley, Martin Havlat will be one of the most interesting Sharks players to watch for next season. As we covered in our analysis of the trade, Havlat's ability to score at even strength is a definite plus to his game, but his historical injury issues have also been a concern. Havlat skated with an orange jersey during the beginning of training camp while he recuperated from shoulder surgery this offseason, an issue that has plagued him throughout his career, but has recently been cleared for controlled contact and should be ready to go sometime in October (at this point it's looking probable he'll play opening night). Although Havlat's injury concerns could be an issue going forward for San Jose he has stayed healthy over the last three seasons, playing in 232 out of a possible 246 games.

At his best Havlat is a quick winger with astounding speed, a great shot, and good two-way instincts. Although he didn't see much penalty kill time with Minnesota, the Sharks are expecting Havlat to help chip in on the shorthanded unit throughout the year and help out a PK unit that was ranked 23rd last year in terms of efficiency. His ability to push the play in the right direction is a great asset to his game, something that shows up in his CORSI totals over the last three seasons-- Havlat finished 2nd, 5th, and 2nd respectively in stints with the Blackhawks and Wild. He was also one of the most effective 5v5 players on those teams in terms of goals per 60 minutes.

With even strength play a good predictor of future success and an attention to defense a big priority for San Jose this season, expect Havlat to fit in well with the Sharks system. Although the two separate deals that sent Setoguchi, Coyle, and Heatley to Minnesota in exchange for Burns and Havlat were related due to Heatley's NTC window, Havlat's season will likely be judged against Heatley's performance in Minnesota. Although we don't expect Havlat to put up the big powerplay and goal scoring numbers that Heatley has throughout his career, a 30 goal year from Havlat is the expectation provided he can stay healthy. Coupled with his ability to stretch defenses with his speed, and knack for putting pucks in the net at even strength, Havlat could be one of the true success stories next season with the team. It's hard not to wonder if the injury bug is going to strike Havlat once again, but it's also hard not to get excited about adding a dynamic player who flourishes at even strength alongside 5v5 dynamos Couture and Clowe.

As with any new player on the roster, it's going to be a game of wait and see. 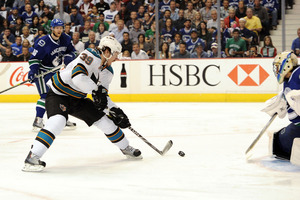 A great many things have been said about Logan Couture on this blog, but perhaps no fact or comment is more telling than this: Logan Couture was the most important San Jose Shark last season.

Antti Niemi might argue Couture for that distinction, but best skater? Couture wins that argument hands down. Coach Todd McLellan and general manger Doug Wilson have heaped praise upon praise on Couture, all of it deserved. Couture not only helped his team when they needed it most, but he did it while earning a good amount of votes for the Calder Trophy.

Although we are hesitant to just expect more of the same next year from Couture (even the best rookies can go through a sophomore slump), he showed too much talent last year for us to expect any slip in production. Considering that Couture will get to play on the second line with Clowe and Havlat, as well as get some heavy time on the power play, an increase in production is more likely.

Couture will still be leaned on to excel defensively as well, and his coaches will lean on him for a heavy share of the shorthanded load. All in all, he should continue to establish himself as one of the best young forwards in the league. 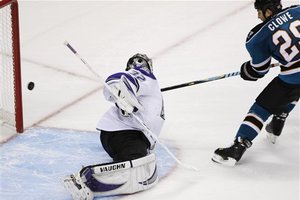 Ryane Clowe is an interesting case-- after struggling through the first half of the 2009-2010 season, Clowe put on the jets in the second half and never looked back, carrying his strong play down the stretch into last season. Finding himself on the second line with then-rookie Logan Couture, Clowe helped to lead the Sharks through a rocky first half and cemented himself as one the primary leaders on the team, both in the locker room and on the ice.

With three straight years of career high point totals (posting 52, 57, and 62 points respectively), Clowe's game has continued to get better and better as the years have gone by. At the age of 29 he's likely reaching his limit in terms of projected career growth, but alongside Couture and Martin Havlat, should be good for another 60 points or so this upcoming season. Tack that on with his ability to drop the gloves in defense of his teammates at the right time, his presence along the sideboards in the offensive zone, and overall strength as a power forward who can drive hard to the net and throw his weight around on the forecheck, Clowe's game is one that should compliment the speed of Havlat and two-way play of Couture. Furthermore, his CORSI numbers were off the chart last season, proving that even with mediocre skating ability and average defensive acumen, Clowe is able to push the play in the right direction and wear down opposing teams in the offensive zone.

The biggest question for Clowe heading into the 2011-2012 season will be if he can continue to maintain the scoring consistency he displayed with Couture in 10-11. In some ways Clowe is similar to Marleau in that his scoring output can fluctuate widely-- some games he'll be a huge factor, and others he will barely show up on the radar. This wasn't an issue so much last season as it has been throughout his career, but bears repeating for a player who is going to be counted on to help the team shine offensively.