Coming off a season in which the Sharks penalty kill finished 24th in the NHL with a 79.6% success rate, it's safe to say one of the biggest priorities for Sharks General Manager Doug Wilson this summer was to address those needs. In response, he brought in PK maestro Michal Handzus and Andrew Murray up front in the forward department, and beefed up the depth on the backend with the addition of Colin White and Brent Burns. These four players will be fixtures on the shorthanded unit this upcoming season, replacing Scott Nichol, Jamal Mayers, Niclas Wallin, and Kent Huskins as San Jose's primary and complimentary penalty kill pieces.

As we've written about before, last year the Sharks top six forwards saw some of the highest TOI totals in the Western Conference. And while not all of that can be accounted for on the penalty kill, the fact that Patrick Marleau and Joe Pavelski led all forwards in shorthanded TOI and logged heavy minutes both at even strength and the power play is an indication that reducing their minutes over the long haul would be beneficial, not just on an individual level (where grueling PK shifts take a physical toll) but on a team-wide level as well (following a kill the Sharks would be able to put out their top line and take advantage of less skilled players who typically are on the ice following a power play attempt).

As it turns out, Sharks Head Coach Todd McLellan has decided to rely more on his lower line forwards this upcoming season. Although it was slipped this in at the end of this blog post by the always stellar David Pollak, the information provided could have some big ramifications on the Sharks next year:

So far, the top two forward pairings are Handzus-Mitchell and Desjardins-(Andrew) Murray, and McLellan is sticking to his plan of taking some of the responsibility away from Joe Thornton and Patrick Marleau so they can get more minutes in offensive situations.

"It doesn't mean they won't penalty kill," McLellan said. "It just means the timing of their presence on it might be a little different. We could be ten games into the year and you'll say this isn't what you told me, but that's the plan."

"We’ve got to see how it evolves," he added. "Can other guys pick up their minutes in that situation? We’ll see."

Three immediate takeaways from this-- it's probably safe to assume that Andrew Murray will be making the team's opening night roster on the fourth line. Furthermore, if there were any lingering doubts that Andrew Desjardins would be handling the fourth-line pivot duties, then those questions should be put to rest as well. And finally, although Joe Pavelski isn't mentioned in this article, the fact he isn't named in the two primary PK lines probably means he will be seeing a reduction from his 1:57 SH TOI last season as well.

All in all these are excellent things to see, especially when one considers the amount of ice time San Jose's top six forwards will be receiving in scoring situations considering the uncertainty surrounding the team's bottom six scoring depth. Furthermore, although Marleau's and Pavelski's two-way games will hopefully return to their historic levels next season, they were actually the two worst forwards on the PK last year in terms of goals against at 5v4.

That's one of the primary reasons why former Los Angeles Kings center Michael Handzus was brought into the fold on the first day of free agency, and as expected, McLellan will be leaning on his industrious new forward heavily next year. As we covered upon his signing, Handzus is one of the most trusted penalty killers throughout the NHL. In Los Angeles Terry Murray tasked Handzus with the most PK minutes out of any forward year in and year out, and loaded him up during defensive zone draws and top competition as well. It's where his bread is buttered, and with the news that the Sharks top players will be seeing a decrease in ice time in this situation, we're sure he'll be bringing a Costco-sized economy pack of whole wheat to every game*.

*That joke is for the dads.

Beside Handzus will be Torrey Mitchell, who gets the nod to enlist in the team's primary forward unit. Mitchell has bounced around the Sharks lineup a bit due to injury, but he's always been a member of the Sharks' PK group. In his rookie season with the club, Mitchell made waves with Mike Grier, playing an impressive 2:36 shorthanded. After a leg injury that sidelined him for the entirety of the 2008-2009 regular season he hasn't been used as much (averaging about 50 seconds per game over the last two years), but with reduced ice time at the top comes opportunity. With this being the first offseason Mitchell has truly had to train and prepare without doing supplementary rehab on his leg, McLellan will be counting on Mitchell's quickness and ability to pressure the puck carrier at the point while Handzus breaks down the cross-ice passing lanes.

Fans should have no problem getting behind this line. However, there are some questions with Desjardins-Murray, a unit that joins a rookie and an oft-injured forward who was signed under the radar. 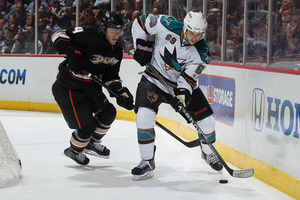 Desjardins' defensive game has been impressive throughout his young career; the big question is whether he can continue to progress and handle second line PK duties in 2011-2012

Desjardins showed that he has the moxy and motor of an NHL player, and his performance in the playoffs last year was a big reason that the team felt comfortable letting Scott Nichol walk in the offseason. Desjardins may play a similar game to Nichol, but he does so with a much larger frame; Desjardins comes in at 6'1", 200, dwarfing the 5'9" 180 pound Nichol. What Desjardins has in size over Nichol he lacks in experience however-- although he has seen heavy ice time in Worcester killing penalties, he hasn't been tasked with applying that to the NHL level against centers such as Henrik Sedin, Ryan Getzlaf, and Pavel Datsyuk.

Murray comes from the Columbus system where hard-nosed defensive coach Ken Hitchcock once held sway, so his credentials check out-- however, with an average of a little over a minute on the PK during his last three seasons with the Jackets populating his resume, there isn't a whole lot of sample size to work with. If McLellan's plan is going to stick, Desjardins and Murray will have to come out of the gates firing on the shorthanded unit-- the Sharks Head Coach isn't afraid to change his lines immediately if he sees something he doesn't like, putting the onus on the two newcomers to make an immediate impact.

In the defensive end of the ice, the addition of Brent Burns and Colin White should help spread out the PK minutes to a ridiculous degree, further reducing the ice time of Dan Boyle. Both Burns and White played over 2:40 per game last season and bring with them size and strength that should translate well in the physical Western Conference. We'll have both on their individual skill sets later in this preview series, but at first blush, don't expect Burns to log that type of ice time shorthanded in San Jose on a nightly basis. With able-bodied PK'ers such as Marc-Edouard Vlasic, Douglas Murray, Dan Boyle, and Jim Vandermeer also in the fold, relying on a specific pairing to carry the day isn't going to be the gameplan.

Although Burns won't be logging the type of shorthanded minutes he did in Minnesota, expect Colin White to see a heavy dose of time at 4v5. White is used to playing big minutes with New Jersey on a shutdown line, and with third pairing duties in his future alongside Jason Demers, he should have some extra gas in the tank to chip in heavily on the PK. He may end up being used in a role similar to the aforementioned Handzus-- the third option for shifts at even strength, but one of the go-to guys on the PK.

All in all the Sharks got better defensively this season, especially on the blueline, and that should help immensely with the penalty kill unit. The biggest question heading into next season isn't necessarily will they be better (because it probably can't get much worse), but how much better will it be? In our opinion the success of the PK unit, and it's ability to reduce ice time for players like Pavelski, Thornton, and Marleau, hinges directly on how well Desjardins-Murray play out of the gate. If they struggle, the only real option left would be to split those minutes up amongst the top six for the third straight year.

And that's something we, and the Sharks, don't want to see.