A lot of virtual ink has been spilled about how Minnesota's position atop the Western Conference standings in early December was far from indicative of how the team had played to that point in the season and was largely predicated on an unsustainable save percentage. With the Wild having lost 11 of their last 12 games heading into last night's matchup with the Sharks, it would seem that those claims have been validated as the regression is in full effect. Which is what makes what transpired last night in St. Paul that much more puzzling and, from a Minnesota standpoint, impressive.

While the Wild were outchanced 17-14 at even strength overall, largely due to score effects taking hold (and, on this night, biting them in the ass) after the team jumped to a 4-2 lead in the third period, Minnesota dictated the flow of this game from the opening faceoff until the Nick Johnson goal that gave the Wild their first two-goal lead of the night. At that point, Dany Heatley and company had outchanced the Sharks 16-9. San Jose was certainly not in top form but if the Wild can replicate that kind of performance on a regular basis they may have a fighting chance against the great PDO monster. Full scoring chance breakdown after the jump. 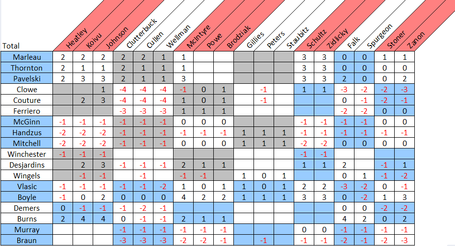 Minnesota's second line went to town on Logan Couture's line who were matched up against each other for a little over 60% of their even-strength shifts. Presumably, this was the primary impetus for Todd McLellan to throw every line but the first into the blender by the middle of the second period. Andrew Desjardins skated several shifts with Logan Couture and Ryane Clowe while Michal Handzus was bumped down to the de facto fourth line and Jamie McGinn, Torrey Mitchell and Benn Ferriero joined forces to create the Sharks' third goal. All three members of the third line that started the game for San Jose had rough outings on the whole, failing to win any of their head-to-head matchups that weren't against the Wild's fourth line.

On the positive side, the top line took over the game in the third period. A lot of that, as I alluded to earlier, was score effects with Minnesota collapsing into a defensive shell after securing their first two-goal lead of the night but Thornton, Patrick Marleau and Joe Pavelski were among the lone bright spots for the Sharks through two periods as well.