Special thank you to Eric Lindquist and Sena Acolatse for this opportunity. Enjoy.

After the Portland game on Jan. 8, you tweeted {@blackalatse}, "much needed win by the #goonsquad tonight." Who are the members of "GoonSquad" and who came up with the name?
{Laughs} Oh man {laughs}. I just thought of it because we have a team full of goons {laughs}.
[Author's Note: The Sharks lead the AHL with 62 fighting majors through 35 games this season.]

How were your milkshake making skills at the 5 & Diner?
My milkshakes were below average {laughs}. They weren’t the best milkshakes and were suspect {laughs}. I tried {laughs}.

How often does your name get butchered and what have been some of the more memorable mispronunciations?
For my first name, I get See-Na a lot, like WWE professional wrestler John Cena. For my last name, the two I get the most are Aco-lots and Aco-lot-sis.

What was it about attending your first live Sharks game that made you want to play hockey?
It caught my eye when I was younger because it was an exciting and fast game. The Sharks put on a good show at HP Pavilion against the Dallas Stars. I made the decision right there that was what I wanted to do.

Your mom, Dena, played basketball in her youth and your sister, Selali, got a basketball scholarship to St. Francis University in Nova Scotia. How supportive was your family of your decision to play hockey?
They were with me 100 percent the whole way.

Did anyone outside of your family give you a bad time for choosing hockey?
No. I got the "maybe you should’ve gone with basketball or soccer" jokes but everyone was supportive.

How did you develop your rocket of a slap shot?
Just by working at it I guess {laughs}. I was always the bigger kid, which helped in Bantams and Midgets. Since I’ve lost weight and am playing at a higher level, my shot isn’t as hard as it used to be {laughs}.

In addition to your shot, your fists are making you a fan favorite in Worcester. How did you get to be good with your fists?
I don’t know {laughs}. It’s just something that has been a part of my game since Bantams {laughs}. I don’t go out there looking to fight but I’ll standup for my teammates and if my team needs a spark, I’ll do it.

Have you watched any of your fights on YouTube? They’re nearly 30 clips.
I’ve seen a couple {laughs}. I try not to watch them much. I just try to do it {fight}. I’m not that technical {laughs}.

Do you remember the 10 player brawl between the Red Deer Rebels and Saskatoon Blades on March 21, 2010?
Yeah {laughs}, I got a three game suspension {laughs}. Red Deer had a couple of their guys go after our goalie Steve Stanford, who was playing really good. After they took a couple of runs at him, coach Lorne Molleken said that was enough, and sent out a bunch of guys saying, "just go for it" and "grab someone off the face-off." I think three or four of us got suspended {laughs}.
[Author’s Note: Acolatse was suspended three games along with Darian Dziurzynski and Duncan Siemen; Coach Molleken was suspended four games while Randy McNaught was suspended five games. Josh Cowen, the Red Deer player who hit Stanford, was suspended five games.]

I noticed Brandon Mashinter gave you a pat when you entered the penalty box after your first AHL fight against Richard Clune of the Manchester Monarchs. Did Mashinter say anything to you?
Mash just told me "good job" and "way to get one under the belt" as it was my first professional fight.

What did you enjoy most about your time playing for the Seattle Thunderbirds, Saskatoon Blades and Prince George Cougars of the Western Hockey League {WHL} from 2006-11?
Juniors were one of the best times of my life. I had a blast. I got lucky to play for three great organizations in Seattle, who drafted me, Saskatoon and Prince George. It’s a development league and I can’t give the coaches enough credit for helping develop me into the player I am today and getting me ready to take that next step. I can’t say I was a big fan of the travel though {laughs}.

What went through your mind when you signed an entry level contract with the San Jose Sharks organization on March 4, 2011 and had San Jose been scouting you during your time in the WHL?
The Sharks had talked to me a little bit before Christmas 2010, saying they were interested and all that. They told me what they expected from me and I just tried to take that into my last half of the year. I didn’t want to disappoint so I strived to play well so I could sign a contract with them. In March 2011, they told me they wanted to sign me and what they expected. It was a good feeling and I was happy. 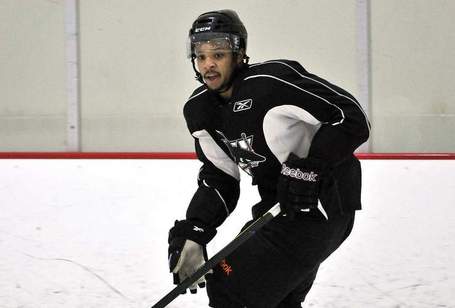 I read Mike Ricci was your favorite Sharks player along with Owen Nolan and Jeff Friesen. What was it like to meet Ricci for the first time and what was it like sharing the ice with him?
It was pretty cool. I never really told Ricci that he was my favorite player. I just kept that to myself and he does a really good job with us. He is good with the boys and is funny. He plays the role perfectly and is going to help a lot with us young guys in making that next step. It’s nice having a guy that you watched when you were younger help you out when you’re older. Bryan Marchment, who is down here in Worcester with us right now, is the same.

How much did San Jose’s training camp help you as a player and prepare you for this current season?
It definitely helped a lot. It gives you an idea of what level you have to be at to play with those guys. They’re at a really high level with a bunch of stars and you see what you need to do to play at that level.

What was it like seeing your name on the back of a San Jose Sharks jersey for the first time?
It was pretty cool. Everyone asks me that one {laughs}. I saw it as making that full circle where it all started. I still have family in California and them coming to see my intersquad game was pretty cool. As for my San Jose jersey number, 62 was assigned to me but if it was up to me, I’d have 14.

What have you enjoyed most about playing in Worcester?
It’s a great group of guys. I can’t say enough about Roy {Sommer} and Cunny {David Cunniff}. They’re great coaches and really good at their job of developing players. I got placed in a good spot with them.

What has been the biggest difference going from the WHL to the AHL?
Playing with grown men and having to be able to think faster. The defense is better and you have to make quicker plays as you don’t have much time. The game is way faster as the guys are stronger and faster. That’s why in summer workouts, you’ve got to get bigger and stronger.

How much do you enjoy the community activities Worcester participates in?
They’re cool. Most of the stuff we do, like "Skating with the Sharks" and autograph signings, are as a team and it gives the fans a chance to meet the players.

What has been the best piece of advice you have ever received?
I’d say probably working on my mental game. In juniors, I had problems with the mental part of things in getting too frustrated or too happy when things were good. I try to stay mellow and be on an even keel as 90 percent of the game is mental.

Have you had a chance to check out your cyber character in EA Sports’ NHL 12 video game?
Yeah and I don’t know what to think because they have me as a white guy {laughs}. Nothing I can do about it {laughs}.

What do you like to do in your down time?
I’m usually tired after practice so I’m a big fan of naps {laughs}. I like to hang out, watch movies, TV shows and go on the computer, that kind of stuff.

Are you working on convincing any teammates to join Twitter in the near future?
I’m working on Mike Connolly right now but he says he’s not interested.

How happy were you when the NBA announced they were having a season?
It’s pretty cool because I get to watch Lebron win a championship right now, so I’m pretty pumped about that {laughs}.

How close are you with Sharks prospect William Wrenn?
Wrenn stayed with me in San Jose during the summer for about two months when we were training. We got along pretty good and still stay in contact.

Will you and Wrenn be giving Logan Couture and Jamie McGinn a run for their money for best bromance in the Sharks organization?
Oh I don’t know how close those two are {laughs}.

Favorite road city..... St. John’s and I got to go to Charlotte last year which was cool

Favorite professional team {other than Sharks}..... Baltimore Ravens and Miami Heat. I jumped right on that bandwagon with LeBron {Laughs}. I like the Oklahoma City Thunder too.

Favorite sport {other than hockey}..... To watch is football, to play is basketball