It's safe to say the Sharks do not hate Winnipeg after that one. In the franchise's first game on Manitoba ice in nearly 16 years, San Jose was more than just full value for the 2-0 win; they amazingly held the Jets to just one scoring chance in the second and third periods combined (and even that chance came with Ondrej Pavelec pulled for an extra attacker). In what was a very low-event game in terms of chances for either team, the Sharks outchanced Winnipeg 12-5 at even-strength and 13-7 overall. Full breakdown after the jump. 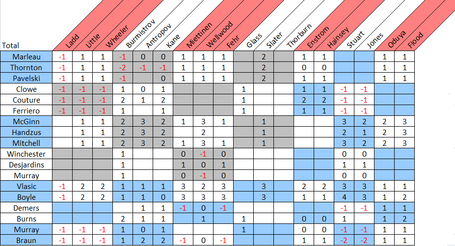 With so few chances recorded by either team in this game, it's hard to say how much can really be gleaned from this chart but one thing's for certain: after having struggled mightily for a little while now and having their ice time significantly reduced against Minnesota, the Sharks' third line had a whale of a game. Michal Handzus was especially effective at both ends of the ice and could have easily scored two goals with his pair of point-blank chances. The trio didn't see a ton of time against the Jets' usually-solid second line but made the most of it, outchancing Nik Antropov 3-0 in their matchup against the big center.