Share All sharing options for: Sharks edge Jackets on late goal by Marleau

While teams like Anaheim and Carolina fully deserve their position as basement-dwellers in the NHL, there's an argument to be made that Columbus' dismal record is far from indicative of the way they've played this season. The Jackets have done a solid job of controlling the flow of the game at even-strength with the score tied this season but had their hopes of a second playoff berth in franchise history squashed early on thanks in large part to some lackluster play by goaltender Steve Mason.

That disparity between the Blue Jackets' record and talent level was on display tonight as Columbus gave the Sharks a run for their money, outshooting them 24-21 at even-strength and outchancing San Jose 9-7 at evens (Full scoring chance recap after the jump). Thankfully for the Sharks, Thomas Greiss came up with a spectacular pad save with 7 seconds remaining in the second period on Columbus defenseman Fedor Tyutin, who was set up perfectly by young center Derick Brassard, followed by a cross-crease robbery of Derek Dorsett 1:28 into the third. Patrick Marleau also came through with the game winner, breaking a 1-1 third period tie by converting a rebound created by a Joe Pavelski shot from just inside the right faceoff dot.

After a first period in which the Sharks failed to capitalize on a Rick Nash double-minor for high sticking as well as a subsequent power play opportunity, they were given yet another extended chance with the man advantage early in the second albeit due to very unfortunate circumstances. A vicious hit to the head of Andrew Desjardins by recent AHL callup Dane Byers of Columbus led to the Sharks center leaving the game for good and Brad Winchester immediately answering the bell in defense of his injured teammate, instigating a short fight with Byers who was given a 5-minute major and match penalty for the hit that will likely merit attention from Brendan Shanahan.

Although the Sharks once again came up empty on what remained of Byers' 5-minute major following the expiration of Winchester's instigator, the team would finally score well into their 10th minute on the man advantage of the evening with Ryane Clowe batting a puck out of midair and into an open net.

Columbus took over for much of the third period, outshooting the Sharks 11-6 overall and drawing even on a laserlike shot from Nash as the Jackets star expertly used Marc-Edouard Vlasic as a screen. Although the Marleau goal eventually sunk the Jackets, it was an impressive effort by a club dealing with some significant injuries up front in Jeff Carter and R.J. Umberger and one newly named head coach Todd Richards should be proud of, apart from the undisciplined penalties.

The Sharks are now 10-1-2 in their last 13 games and have a 5-point lead on second-place Los Angeles in the Pacific Division with 3 games in hand ahead of the Kings' tilt with Calgary later tonight. They'll have a chance to prove themselves further with an important test against one of the Western Conference's best teams tomorrow afternoon in Chicago. 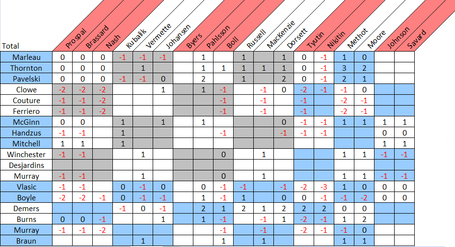