The 4-3 final score belies how one-sided an affair this game was. The Sharks have had their struggles with the Blackhawks for years now and they were on display again last night in the Windy City as Chicago clobbered the Sharks in the scoring chance department, doubling up on them with 24 scoring chances to San Jose's 12. In three games against the Hawks so far this season, the Sharks have been outchanced 54-29 at even strength and 66-37 overall. 65.1% of all even-strength scoring chances and 59.2% of all Corsi events (EV shots, missed shots and blocked shots) in those games have been in Chicago's favor. If you're getting a head start on your list of teams that the Sharks should look to avoid at all costs in the Stanley Cup Playoffs, the Blackhawks should be at the top. 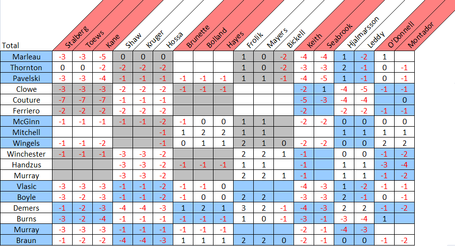 Joel Quenneville's gameplan from the drop of the puck in this one was to send Jonathan Toews over the boards whenever Logan Couture was on the ice. It paid off big time for the Hawks, to the tune of Couture's worst scoring chance differential of the season as Toews, Patrick Kane and the surprisingly effective Viktor Stalberg skated circles around the Sharks. The only bright spot of this game was that the Sharks' makeshift third line of Jamie McGinn, Torrey Mitchell and Tommy Wingels, assembled at the start of the second period, drove results in the right direction against the Dave Bolland line, accounting for two of the Sharks goals and being the only line to tie or win the chance battle against a line other than the Hawks' fourth.