Last week, the Worcester Sharks swept both of their games to extend their winning streak to three games and improved their record to 19-11-3-4 with 45 points. As a result, the Sharks are now in second place of the Atlantic Division of the AHL Eastern Conference, five points behind the division leading St. John’s IceCaps.

The Sharks’ week started Friday night {Jan. 13} as the team traveled to the Dunkin Donuts Center in Providence, RI, to play the hosting Providence Bruins in their fifth meeting of the season and skated away with a 1-0 victory.

Sharks forward Brandon Mashinter had the lone goal of the game at 1:16 of the third period while goalie Harri Sateri {9-5-0, 2.50 goals against average, 0.909 save percentage} stopped all 23 shots to become the first goalie in Sharks history to record back-to-back shutouts. In addition, Sateri extended his shutout streak to 130:12, putting him within reach of Alex Stalock’s team record of 135:30.

Fireworks exploded just 1:48 into the game as Sharks defenseman Nick Petrecki dropped the gloves with Bruins forward Bobby Robbins in a 20 second scrap at center ice. The fight was Petrecki’s second of the season and extended the Sharks’ streak to 22 consecutive games with a fighting major.

With the game still scoreless at 18:49 of the second period, Robbins dropped Sharks forward Nathan Moon with a hit after the whistle that caused a huge scrum up and off-setting penalties. Just nine seconds later, Sharks captain Mike Moore dropped the gloves with Bruins defenseman Nathan McIver after McIver went after Moore on the ensuing face-off.

The 10 second scrap saw both combatants land several solid right hands before Moore, who was playing with stitches on the whole right side of his face, landed a wicked right hand that landed flush on McIver’s chin and dropped him. The fight was Moore’s third of the season.

Early in the third period, Moon sent an in zone pass out to center ice to Mashinter, who had gotten behind the Bruins defense. Skating in all alone on Bruins goalie Michael Hutchinson, Mashinter snapped a shot past the blocker of Hutchinson from in-between the face-off circles for his fifth goal of the season at 1:16.

For the game, the Sharks outshot the Bruins 26-23, were 0-for-1 with the man advantage and 2-for-2 on the penalty kill... Moore played in his 216th game, tying him with Lukas Kaspar for the franchise record... With the two fights, the Sharks now have 64 through 36 games, the most in the AHL... Head coach Roy Sommer is now four wins away from 500 in his AHL career {4th all-time in AHL}... Cam MacIntyre {inj}, Ben Guite {inj}, Tony Lucia {inj}, Curt Gogol {inj} and Brian O’Hanley {scr} did not dress for the Sharks... As a team, the Sharks posted back-to-back shutouts last season when Carter Hutton and Daren Machesney did it against Providence and Springfield on Feb. 5 and 10, 2011 {Courtesy of Bill Ballou}.

On Sunday afternoon {Jan. 15}, the Sharks returned home to the DCU Center to host the visiting Syracuse Crunch in their first meeting of the season and skated away with a 3-2 shootout victory on "Puck and Paws" day.

Sharks forwards Jack Combs and John McCarthy scored in regulation for the Sharks while forward Brodie Reid scored the game winning goal in the shootout. Sharks goalie Tyson Sexsmith {9-7-1-4, 2.13 goals against average, .925 save percentage} stopped 40-of-42 shots and won in the shootout for the first time in his AHL career.

Crunch forward Luca Caputi gave the Crunch a 1-0 lead with his fourth goal of the season at 8:24 of the first period. After corralling a pass from Crunch defenseman Mathieu Carle at the top of the left face-off circle, Crunch forward Jean-Francois Jacques passed the puck in the slot to a wide open Caputi, who roofed a backhanded shot over Sexsmith’s shoulder for the goal.

Combs answered back for the Sharks with this sixth goal of the season at 10:15 to tie the game at 1-1. After having his rush down the left side on Crunch goalie Iiro Tarkki broken up by Crunch forward {and former San Jose Shark} Mark Bell, Connolly sent a cross zone pass to Sharks defenseman Sena Acolatse, who fired a low shot on net from inside the right face-off circle that Tarkki came way out to stop. Combs, who was positioned right in front of Tarkki, corralled the rebound and fired a quick turnaround shot into the open net for the goal.

McCarthy gave the Sharks a 2-1 lead with his 11th goal of the season at 2:00 of the second period. Moore carried the puck into the left corner of the Crunch zone and got the puck to Reid, who fired a quick shot on net from inside the left face-off circle. Tarkki made the save but left a rebound that McCarthy corralled on top of the crease and backhanded top shelf on the glove side for the goal.

At 7:03 of the third period, Crunch forward Peter Holland tied the game at 2-2 with his 13th goal of the season off a centering pass from linemate Patrick Maroon on a 2-on-1 rush that deflected off of his leg and into the Sharks net for the goal.

For the game, the Sharks were outshot 42-24, were 0-for-3 on the man advantage and 5-for-5 on the penalty kill... Moore became the all-time leader in games played for the Sharks by playing in his 217th game, surpassing Kaspar... Coach Sommer is now three wins away from 500 for his AHL career... The Sharks had their streak of 22 consecutive games with a fighting major snapped... The Sharks have not allowed a power play goal in four straight games, going 15-for-15... MacIntyre {inj}, Guite {inj}, Lucia {inj}, Gogol {inj}, O’Hanley {scr} did not dress for the Sharks... The Sharks are 20th in the AHL on the power play at 16.2%, fifth in penalty killing at 84.7% and third in penalty minutes with 21.1 per game. 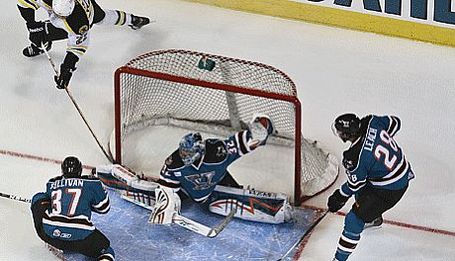 During the broadcast of the Crunch vs. Sharks game, it was announced by Lindquist that Stalock will be returning to game action in 7-to-10 days, less than a year after suffering a horrific nerve injury that nearly ended his career.

In a home game against the Manchester Monarchs on Feb. 4, 2010, Stalock's left leg was stepped on by Monarchs forward Dwight King, slicing the nerve behind his left knee. Stalock had successful surgery at the Mayo Clinic in Rochester, Minn., to repair the laceration ten days later.

There hasn't been a decision made as to whether Stalock's first game back will be with the Sharks or the Stockton Thunder of the ECHL.