The Sharks dominated the second period after Vancouver owned much of the first. Unsurprisingly, the two best teams in the NHL at generating power play shots created some terrific chances with the man advantage.

San Jose had 10 even-strength scoring chances in this game. An incredible six of those came off the stick of Benn Ferriero. Immediately after Ferriero's second period goal, four of the Sharks' five chances at that point had come from Ferriero. Definitely one of the better individual performances with regards to scoring chances I've seen this season.

I think Joe Thornton is flattered a bit by a +1 EV chances rating in this game, especially considering three of the four chances that went against the Sharks with Jumbo on the ice were almost solely the result of his egregious defensive-zone giveaways. Another really strong game from Marc-Edouard Vlasic and I already talked about how great Ferriero was at creating chances in this game. 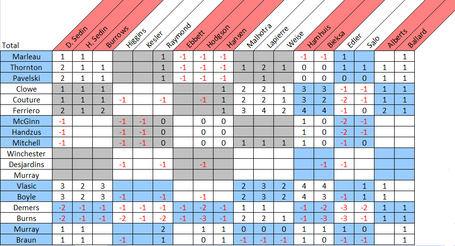 Click to enlarge. Alain Vigneault generally prefers to deploy his players based on what area of the ice the puck is in rather than any type of hard line match so there was a fairly even distribution of Sedin time between the top three Sharks forward lines. Thornton and Joe Pavelski were out against the twins most frequently with about 6 minutes of head-to-head time against Henrik Sedin each, with Patrick Marleau joining them after being swapped with Ferriero about midway through the first period. The trio was very effective in containing the Sedins, outchancing them at even strength.

The real story, though, is Marc-Edouard Vlasic's performance against the twins in this one. I probably sound like a broken internet with all the praise I've heaped on Pickles lately but despite the fact that he played more minutes against the twins than any other Shark (nearly 8 minutes head-to-head against Henrik), the Sharks yielded zero even-strength chances against with Vlasic on the ice.