Dominant first period for the Sharks as they outchanced the Sens 8-2 in the opening twenty minutes only to tail off for the remainder of the game as the team recorded just nine more chances over the final two periods. An Ottawa club that's very much for real rode some excellent third period defense, allowing just three Sharks chances against, and an off night from Antti Niemi (both of Colin Greening's goals were from outside the scoring chance zone) to a 4-1 win. The Sharks team that showed up in the first period to drive possession at an elite rate and generate a boatload of chances has unfortunately not been there a lot of nights as of late and their inability to sustain that level of play over the second and third periods is cause for more concern. Of course, it bears mentioning that the team was once again without the services of Ryane Clowe. 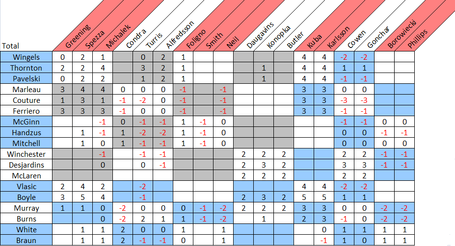 Strangely enough, and due in large part to Ottawa's shortened bench following in-game injuries, both Thornton and Logan Couture ended up facing Jason Spezza for an identical amount of ice time at even-strength in this one, with Couture and Patrick Marleau looking the best in that head-to-head matchup. The third line, when together, has been rather Jekyll & Hyde over the past ten games. After two impressive outings for them against Chicago and Calgary, a bit of a poor effort against the Daniel Alfredsson line cost the team in this game.