Sharks dominated in 4-3 loss to Vancouver

Share All sharing options for: Sharks dominated in 4-3 loss to Vancouver

The inevitability of Cody Hodgson's game-winning goal with four minutes remaining in the third period, as flukey as the actual goal was in deflecting off Michal Handzus' stick and past Antti Niemi, was palpable almost from the opening faceoff in this one. The Canucks dictated the flow of the game throughout, rarely relinquishing puck possession en route to outchancing the Sharks 19-10 and winning 4-3 to take the regular season series three games to one, with San Jose's only victory coming in a shootout (Full scoring chance summary after the jump).

If there's a positive to be taken from this game for the Sharks, apart from the pseudo-positive that they would have probably fared better with Ryane Clowe and Martin Havlat in the lineup, it was their performance on special teams. The Sharks held Vancouver to zero scoring chances and just three shots on four power play opportunities in addition to scoring a shorthanded goal and converting their lone man advantage of the afternoon.

But back to the doom and gloom. SnarkSD had a terrific post earlier in the week detailing the Sharks' struggles against the upper echelon of the Western Conference and today's effort was more of the same against a Vancouver team showcasing why they've won more games from October through June than any other team in the NHL since 2008. In four games between the clubs this season, 55.5% of all even-strength scoring chances and 52.5% of all Corsi events have been in Vancouver's favor. The road to the Stanley Cup this spring will presumably go through either Vancouver or Chicago and, as it stands, those routes look to be littered with potholes for the Sharks.

The Canucks struck early with the recently-rehabilitated David Booth deflecting an Alex Edler point shot past Niemi ten seconds after Vancouver gained the blue line courtesy a neutral zone turnover by Joe Thornton. Brad Winchester had a pair of point-blank chances to answer just a minute later but hit the post on his first attempt and missed the net on the second. Three of the Sharks' seven even-strength scoring chances in this game were by Winchester and while he's been a pleasant surprise all season long, a fourth-liner driving the bus isn't exactly what the Sharks are looking for with so many highly paid players on the roster.

Vancouver had a slew of opportunities throughout the period including a sequence wherein a sharp angle backhander by Chris Higgins generated chances in tight for Booth and Ryan Kesler but both were unable to convert. With Jamie McGinn in the box serving a bench minor late in the first, Vancouver looked to increase their lead with the help of their dominant power play but instead watched as Andrew Desjardins sprung Logan Couture for a shorthanded breakway that resulted in one of the most memorable goals of Couture's already impressive career.

Couture would score again just a minute into the second period as the Sharks carried over the bulk of a power play drawn late in the first. Taking a return feed from Thornton, Couture snuck a backhand shot past an unready Roberto Luongo to give the Sharks their only lead of the night but it was short-lived. Just three minutes later, after losing a defensive zone faceoff to Cody Hodgson, Michal Handzus failed to cover the Canucks rookie who promptly slid the rebound of a Mason Raymond shot past Niemi.

The hatred between the two rival clubs would manifest later in the middle frame, initiated when Jamie "Orca Hunter" McGinn brutally checked Canucks defenseman Dan Hamhuis into the San Jose bench. Winchester mauled Alex Burrows behind the Vancouver net minutes later. But the third feat of strength came from an unexpected participant on the San Jose end as Joe Pavelski dropped the gloves with Keith Ballard for only his second ever NHL fight and first since he went toe-to-toe with then-Duck Ryan Whitney during the playoff series that must not be named. It was also significant that Ballard was a combatant as he was the dance partner for another noted Sharks non-pugilist in Patrick Marleau back when Ballard was a member of the Coyotes in 2006.

Vancouver once again had plenty of chances to regain the lead in the third period, the most notable coming when Couture heroically dove in front of a Henrik Sedin shot that would have undoubtedly found twine if it weren't for the block with Niemi out of position. The Canucks would eventually win the "race to three" as an ill-advised Dan Boyle pinch lead to a 2-on-1 that Ryan Kesler cashed in. Boyle redeemed himself thirty seconds later, scoring on the rebound of his own shot as he showed no hesitation to once again take a chance offensively. Unfortunately, it was all for naught as Hodgson's second marker of the game hung the Sharks with an L in a game they decidedly deserved to lose. 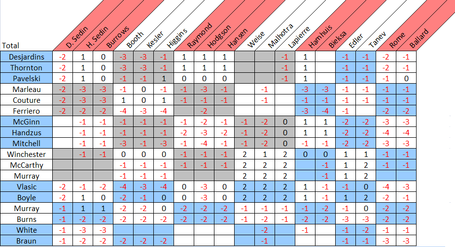 Surprisingly, the Sharks' top line (now featuring 100% more Desjardins!) didn't fare all that poorly against the twins, who were hardly noticeable in this game save for the aforementioned chance by Henrik. It was the Kesler line that really did a number on them, as well as Benn Ferriero who had a really poor game both by eye and based on the chances.