For perhaps the first time in his NHL career, Ales Hemsky was the windshield instead of the bug. While it didn't appear that the oft-injured Oilers forward's knee-on-knee collision with Sharks defenseman Brent Burns was intentional (although the officials deemed it as such), the end result was a painful one, both for Burns and potentially the Sharks' prospects for the rest of the season.

Six minutes and thirty-seven seconds into the third period, with the Oilers nursing a 1-0 lead, Burns attempted a deke around Hemsky on the left wing boards but ended up the recipient of a knee-on-knee hit that left the big blueliner crumpled on the ice from where he would then struggle to make his way to the Sharks' bench and finally the dressing room to end his night. Further information about the extent of Burns' injury has yet to be revealed but, despite the Sharks' depth on the back end, they can't afford to lose Burns for an extended period. His 0.589 even strength scoring chance ratio and +70 EV scoring chance +/- both lead the team, in addition to the considerable value he adds with the man advantage.

Despite more than a few zone entries that were less than cohesive to say the least, the Sharks capitalized on the ensuing 5-minute power play as a result of Hemsky's ejection from the game. Joe Thornton initiated one of the Sharks' few successful entries, carrying the puck over the blueline and executing a drop pass to Dan Boyle whose slapshot was deflected top shelf by the red-hot Logan Couture. Although the remainder of San Jose's major power play was largely a discombobulated mess, the Sharks dominated possession in the third period, allowing zero Oilers chances against (Full scoring chance summary after the jump). It was only the second time all season the Sharks have gone an entire period without allowing a scoring chance, the first being a low-event second period in Winnipeg a week and a half ago.

Even prior to the third period, the Sharks were in control for much of this game against an injury-riddled Oilers team missing quite possibly their MVP in Tom Gilbert and icing a banged-up Frankenstein version of their best forward in Taylor Hall, who was noticeably not close to 100%. San Jose outchanced Edmonton 19-6 at even strength and 22-8 overall. If it weren't for the heroics of Devan Dubnyk, the Oilers wouldn't have been able to take this game to overtime, let alone pull off a shootout victory.

After a first period littered with Oilers turnovers in which the Sharks outchanced Edmonton 7-3, including a Jamie McGinn shot that rang off the post, the Oilers were first to get on the board a little under seven minutes into the second period as a Jeff Petry shot took an unlucky bounce off Douglas Murray and right into the slot where an uncovered Jordan Eberle buried the puck past Thomas Greiss, who picked up yet another quality start with a 0.944 SV% in this game, bringing his season total up to 0.927. Greiss has posted a SV% of 0.940 or higher in 7 of his 11 starts this season.

Eberle and Greiss were once again involved in the largely anti-climactic shootout that closed out this game, with Eberle and Anton Lander's attempts being turned aside by Greiss in the skills competition while Sam Gagner and Taylor Hall converted their shots. Joe Pavelski, obviously, scored for the Sharks but Michal Handzus, Dan Boyle and Couture (who should probably try a different move at some point) did not, giving the Oilers the extra point. 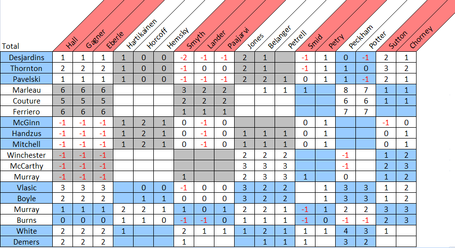 First of all, someone mentioned the other night that I should use a different shade of teal in the chance summary above to make it more readable; please let me know in the comments if this is any better (or worse). Couture and Patrick Marleau dominated this game by the chances, despite spending a lot of time matched up against the Oilers' de facto top line at evens. Can't fault the Handzus line too much for their minuses against Hall and co. since it's the result of Eberle's somewhat lucky goal although I'd like to have seen stronger coverage by Handzus in particular on that play.