Sharks eke out a 1-0 win against the Flames

Share All sharing options for: Sharks eke out a 1-0 win against the Flames

The Sharks have rarely been outchanced this season by teams outside of the Western Conference's "Big Four" of Detroit, Vancouver, St. Louis and Chicago but they were edged out on the chance count tonight and the margin had the potential to be wider if it wasn't for a stellar second period in which San Jose allowed just one Flames scoring chance.

After a relative snoozefest through two periods, the game really opened up in the third with the Flames dominating early in the frame before the Sharks generated a glut of good looks at the net before and after the goal by Benn Ferriero. Calgary pressured with a few chances to tie the game late in the third, including two opportunities by Jarome Iginla with Miikka Kiprusoff pulled, but were unsuccessful as Antti Niemi picked up the shutout. 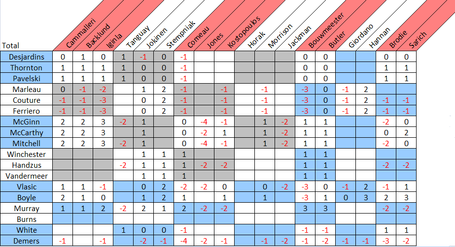 Small sample size and all that, but the third line has looked markedly better over the past few weeks whenever McLellan opts to remove Michal Handzus from it, regardless of the replacement (Tommy Wingels stepped in for Zeus in Chicago and helped form the only trio that drove the play forward in that game). There isn't a lot else to be said about this game, apart from the disclaimer that Marleau, Pavelski, Boyle and Vlasic were better at even strength than their chance differentials indicate since they were out there essentially killing a penalty with Kiprusoff pulled at 4v4.