Playing their final two games before the AHL All-Star break, the Worcester Sharks lost both of their games and earned only one point out of a possible four. Overall, the Sharks are now 20-13-4-5 with 49 points, and fell to third place in the Atlantic Division of the AHL Eastern Conference, 11 points behind the division leading St. John’s IceCaps.

On Wednesday night {Jan. 25}, the Sharks were home at the DCU Center to host the visiting Springfield Falcons in their sixth meeting of the season and were defeated 4-2.

Connolly gave the Sharks an early 1-0 lead with a power goal, his eighth goal of the season, at 8:39 of the first period. With Falcons forward Cam Atkinson in the penalty box for hooking, the Falcons won a face-off inside their own zone but Falcons goalie Paul Dainton, who was making his first AHL start since Oct. 15, 2011, lost the puck behind his own net to Combs. Combs quickly centered the puck out in front to Connolly, who backhanded the puck into the empty net for the goal. Irwin was credited with the secondary assist.

Falcons forward Alexandre Giroux tied the game at 1-1 with his 14th goal of the season at 7:25 of the second period. Entering the Sharks zone on the right side, Falcons captain Dane Byers centered the puck in front for Giroux, who had gotten in front of Sharks defenseman Sena Acolatse, and Giroux deflected the puck past Sateri on the blocker side for the goal.

The goal ended Sateri’s shutout streak at 157:37, which shattered the previous team record held by Alex Stalock by 22:07.

Sharks forward Brandon Mashinter had a chance to regain the lead for the Sharks with a penalty shot at 15:03 but was stopped by Dainton.

Giroux gave the Falcons a 2-1 lead with his second goal of the game at 5:10 of the third period. Off a turnover by the Sharks inside their own zone, Giroux corralled the loose puck on top of the right slot and fired a quick snap shot on net that beat Sateri over the shoulder for the goal.

Byers extended the Falcons lead to 3-1 with his ninth goal of the season at 8:39. Off another turnover by the Sharks inside their own zone, Falcons forward Andrew Joudrey sent a pass from the right wall across the zone to Byers, who fired a one-timer on net from just inside the left face-off circle that beat Sateri on the glove side for the goal.

Falcons forward Tomas Kubalik made it 4-1 Falcons with a power play goal, his eighth goal of the season, at 16:34. With Irwin in the penalty box for hooking, the Falcons won the ensuing face-off and held the puck inside the Sharks zone. From the right side, Falcons forward Martin St. Pierre sent a pass out to the top of the point to Falcons defenseman David Savard, who fired a one-timer on net that Kubalik deflected in front for the goal.

Irwin scored a late power play goal, his eighth goal of the season, at 19:54 to cut the Falcons lead to 4-2. With Giroux in the penalty box for roughing and slashing, Irwin fired a slap shot on net from the top of the point that beat Dainton on the glove side for the goal, which was Irwin’s first goal in 18 games and seventh power play goal this season. Combs and Acolatse were credited with the assists.

For the game, the Sharks outshot the Falcons 39-27, were 2-for-7 with the man advantage and 5-for-6 on the penalty kill... Cam MacIntyre {inj}, Ben Guite {inj}, Tony Lucia {inj}, Ryan Del Monte {scr} and Nick Petrecki {scr} did not dress for the Sharks... Forward John McCarthy was reassigned to Worcester from San Jose on Jan. 25 but was held out of the lineup as it would have been his fourth game in five nights. 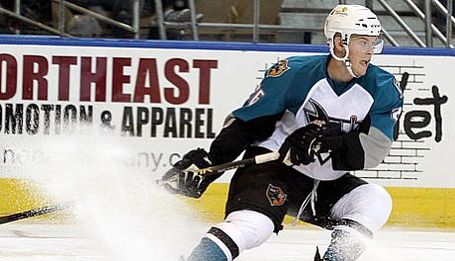 On Saturday night {Jan. 28}, the Sharks traveled to the Verizon Wireless Arena in Manchester, NH, to play the hosting Manchester Monarchs in their eighth meeting of the season and were defeated in overtime, 3-2.

McCarthy and James Livingston scored for the Sharks while goalie Tyson Sexsmith {9-8-1-5, 2.15 goals against average, .925 save percentage} stopped 20-of-23 shots in the loss.

Before the game started, Monarchs forward Richard Clune exchanged words with Sharks forward Curt Gogol, who was leaning over the Sharks bench. At 3:31, the two engaged in a brief six second scrap that ended when Gogol swung wildly and lost his balance. Clune threw several punches to Gogol while Gogol was on the ice, which caused Gogol to explode back up to his feet. The linesmen intervened and tackled both players to the ice.

11 seconds later, Acolatse dropped the gloves with Monarchs forward J.D. Watt in another 30 second scrap. Unlike the even tilt between McLaren and Johnson, Acolatse destroyed Watt by pinning him up against the glass and landing a dozen unanswered left handed underhand shots to the face. Acolatse then landed seven overhand rights before losing his balance and falling to the ice. Acolatse is now 6-0 in fights this season.

Monarchs forward Justin Azevedo gave the Monarchs a 1-0 lead with a power play goal, his eighth goal of the season, at 15:49. With McCarthy in the penalty box for tripping, Monarchs defenseman Patrick Mullen sent a pass from the Monarchs blue line out to Monarchs forward Stefan Legein at the Sharks blue line. Legein entered the Sharks zone on the left side, and sent a backhanded pass to the far post that Azevedo deflected into an empty net for the goal.

Monarchs forward Dwight King extended the Monarchs lead to 2-0 with his 10th goal of the season at 5:56 of the second period. Entering the Sharks zone on the right side, King skated down towards the left face-off circle, held the puck out to get around Petrecki and slid a backhanded shot through Sexsmith’s legs for the goal.

McCarthy cut the Monarchs lead in half at 16:06 of the third period with a power play goal, his 12th goal of the season. With Clune in the penalty box for slashing, Combs held the puck behind the Monarchs net, and centered the puck in front for McCarthy, who was stopped initially by Monarchs goalie Jeff Zatkoff but McCarthy picked up his own rebound and fired the puck top shelf for the goal. Chad Costello was credited with the secondary assist.

Livingston tied the game 28 seconds later with his fourth goal of the season. Off a turnover by the Monarchs in their own zone, Sharks forward Marek Viedensky fired a backhanded shot on net from deep inside the left face-off circle that Zatkoff stopped. However, Zatkoff left a rebound and Livingston, who was crashing the net, poked the puck through Zatkoff’s legs for the tying goal. Sharks defenseman Taylor Doherty was credited with the secondary assist.

In overtime, Connolly was called for slashing at 3:28, giving the Monarchs a 4-on-3 power play advantage. The Monarchs won the ensuing face-off inside the Sharks zone, and Monarchs defenseman Jake Muzzin ripped a shot on net from inside the right face-off circle that hit off the post and beat Sexsmith on the glove side for the game winning goal.

For the game, the Sharks outshot the Monarchs 35-23, were 1-for-4 with the man advantage and 3-for-5 on the penalty kill... MacIntyre {inj}, Guite {inj}, Lucia {inj}, Nathan Moon {scr}, Jimmy Bonneau {scr} and Brodie Reid {scr} did not dress for the Sharks... With the three fights, the Sharks now have 70 through 42 games this season, the most in AHL... Prior to the start of the game, Sharks defenseman Brian O’Hanley was signed to an AHL contract... The teams combined for 52 penalty minutes on 17 infractions... The Sharks are 18th in the AHL on the power play at 17.0%, seventh on the penalty kill at 83.4% and third in penalty minutes at 20.7 per game.

Sullivan, who played for the Rampage from 2006-10 when they were the AHL affiliate of the Phoenix Coyotes, registered 59 points {17-42-59} in 105 games with Worcester over the last two seasons. This season, Sullivan was second amongst Worcester defensemen with 24 points {5-19-24} in 32 games played.