The San Jose State Spartans hockey team are getting ready to begin the second semester of play this season. They finished the first semester with a 10-7-1 record and a ranking of ninth in the ACHA Division 2 West Region. However, from the general feeling I've gotten from talking to the team, they feel like they could do much better.

They'll have the chance to improve in the second half with a schedule that includes challenging road trips to Arizona and Colorado. But they'll start this weekend with a two-game series against the College of the Canyon Cougars, a Division 3 team who are currently on a 13-game winning streak after dropping a pair of games to this SJSU squad to start the year.

I had a chance to sit down with Spartans Head Coach Aaron Mullagh after practice this week for a few quick questions. Mullagh is entering his second semester as Head Coach for the team.

Coach Mullagh, in the last game for the Spartans before the break, you had a disappointing 3-5 loss against the Division 3 Sacramento State Hornets. What went wrong for the Spartans in that game?

It was a variety of things. Obviously, we had a bit of a slow start that we didn't like, and had a tough time recovering from that. [We] came out, and the guys didn't play a full sixty minutes of hockey.

In the third period they certainly did, they played very well. Unfortunately the goaltender stepped up and played really well. I believe we had 20+ shots and he was able to stonewall the guys. It was a little bit of a lesson of 'too little, too late.'

What were your thoughts on the team for your first semester as the new head coach of this squad?

It was an interesting transition period. We're happy and fortunate to finish in the top 10 rankings every month. Which, I believe we deserved to every month. But I think we look back at it and we'd like to have finished a little bit better. But everything is sort of day-by-day and game-by-game.

The gentleman are starting to understand the process of the way to win hockey games. And it's just a matter of playing a full sixty minutes game-in, game-out. And I have no doubt the guys learned a lot of valuable lessons. Sometimes you've got to fail to succeed. They had a few failures, seven losses, and each one of those came with a valuable lesson. 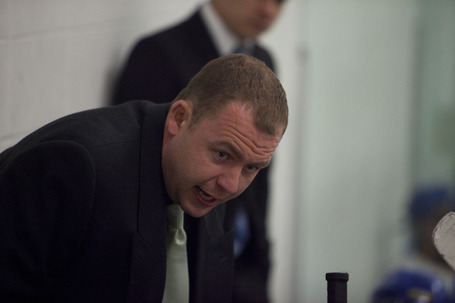 Coach Aaron Mullagh on the bench. Courtesy of Hockey Shots.

Have you made any changes to the lineups or the strategy over the winter break that you've had?

Yeah, we've moved a few things around here and there. Nothing really of note, haven't really shuffled the lines up or anything like that.

Obviously we're really happy to have Steven Paul Stichler back in the lineup full-time. So, that's a change. Being able to add him into the lineup will definitely provide some energy and strength down the middle. And we've worked on a few things with the defense.

We did a lot of work over the break. It was good stuff. Guys are on the same page; they look sharp. And we've also really picked up the conditioning of the off-ice workouts. So those would be the major changes that we've made other than a few things here and there.

You've got another 2 games coming up against College of the Canyons. You started the first semester against them. Is your game plan going to be the same as the last games?

Yep, they're a great hockey team. They've got a young man by the name of [Brian] Voogt who is a point-maniac [Voogt is currently second in ACHA D3 with 69 points in only 15 games]. He's a very good hockey player. And they're quite a good team. So by no means are we going to take them lightly.

It was 7-5 and 9-5. We were happy with our offense there, but we certainly want to improve on our goals against. We're just going to go at them and give them everything we can; throw the kitchen sink at them and go there and try to be successful from that.

You've got a tough Arizona trip coming up. What does this team have to do to compete and beat a Arizona State D1 squad?

You said the word right there in the question: team. And that's exactly what they have to do: They need to play as a team, a five-man unit. Stay out of the penalty box, make sure that they're strong, keeping on their guys in the zone, keeping their coverage together and putting everything at the net and we'll be real successful.

I'd like to thank Coach Mullagh for sitting down with me. The Spartans face-off against College of the Canyons tonight at 7:30 pm from the north rink of Sharks Ice at San Jose. The second game in the series will be tomorrow at 7:00 pm. Both games will be streamed on-line at FastHockey.com.