Much like their last game against Columbus, the Sharks were outchanced in the first period tonight only to roar back and dominate the Capitals for much of the second and third, recording 16 scoring chances to Washington's 10 over the final two frames of a contest that was played almost entirely at even strength. Click through for a full breakdown of the chance data, although since it feels weird (to me anyway) having such little text preceding the jump, here's a look at the Sharks players who performed the best and worst based on their even strength scoring chance differentials in the game (idea stolen from Jackets Cannon). 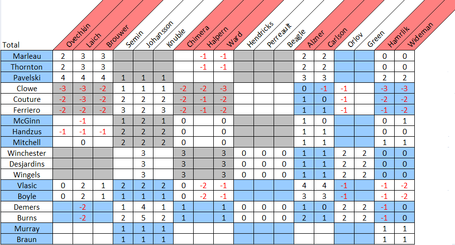 Todd McLellan did everything in his capacity to ensure his top five-man unit of Pavelski, Joe Thornton, Patrick Marleau, Vlasic and Boyle were out on the ice whenever Alex Ovechkin was and it appears to have paid off as the five Sharks either tied or won their chance battle against the Great Eight. Where Ovechkin was able to do his damage, at least chance-wise seeing as he was held off the scoresheet, was in his brief time against the Logan Couture line who uncharacteristically struggled to establish much in the way of sustained possession in this game despite making, by eye, quite a few good reads in their own zone.