I haven't seen live hockey at HP Pavilion in nearly a year so I was thrilled that I had tickets to attend last nights ECHL game. The game had a start time of 7:30 and I drove there half an hour early in excitement of free parking (in addition to the free tickets!). Unfortunately the HP lot was full and I had to find parking downtown. It didn't really matter as I prepared myself for an exciting night of hockey. I would be in the company of thousands of other bay area hockey fans and just driving through downtown made me feel reminiscent of all the Sharks games I've been to. I thought of the energy HP Pavilion could have during the playoffs, the exciting goals Dan Boyle scores regardless of the team he plays on, and the gourmet nachos, oh how delicious and kind of gross they are at the same time. I couldn't get there fast enough.

I'm having a little trouble putting into words how I felt so let me use an analogy to help show what my experience was like. Imagine yourself as a child again on Christmas morning. You rush towards the Christmas tree, searching for presents that have your name on it. You find yours, you shake it, and you know its a box. You rip off the gift wrap to slowly reveal that underneath it is the Playstation you always wanted. You jump up and down full of joy in anticipation of finally playing it. As you start opening the box, instead of finding a Playstation you discover there's an electronic Leap Frog learning game. Yeah, that "educational" video game thing and it sucks.

Sure that's a little bit of an exaggeration, but it's sort of what I felt like. I've been so used to opening the doors of HP Pavilion to watch Sharks hockey that anything else would basically be a disappointment. To be fair though, I was sort of expecting that when the Bulls took the ice, they would rip off their jerseys and reveal themselves to be Sharks players and then they would promptly defeat the Thunder 27-0. I'm a little spoiled however as any hockey should be good hockey to me, but it's been so long since I've last seen NHL hockey! I couldn't really find myself caring about either team too much so I was rooting for as many goals and fights as possible and the game lived up to that standard. So while this ECHL action between the Bulls and Thunder was nowhere near Sharks hockey, it sufficed for this rough time we have to deal with the wretched lockout. 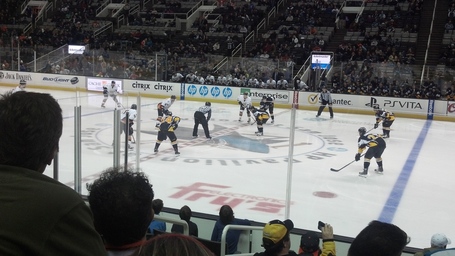 The scoring action started in the first period when Sharks Prospect Mikael Tam scored his first professional goal. Just 92 seconds on the clock later Stockton's Toni Rajala to tied up the game and 5 minutes later gave the Thunder the lead 2-1. To match the three goals scored in that period, three fights also took place.

The second period started with some promise for the Bulls home team. Kris Belan tied the game up at 2-2 for what turned out to be a brief amount of time. The Thunder responded with three goals and the third being Rajala's for a hat trick. By my count, a total of two whole hats were thrown onto the ice. Exciting. Thunder lead 5-2.

In the third period the Bulls teased the home crowd by scoring two goals, from Sacha Guimond and Alex Tuckerman. Just when they started gaining momentum and energy from the crowd, Cameron Abney of the Thunder scored with 2:58 remaining in the game for the final score of 6-4.