The #5 San Jose State Spartans hit the road for the second time in three weeks, this time to the state of Colorado to face four ranked opponents. A sweep would have likely catapulted SJSU up to #3 in the West. Instead, the Spartans went 1-3, and they'll be lucky if they only drop one spot.

After an early flight that morning, the Spartans looked to get the trip going with a rematch against #13 Denver. Earlier this year, Denver upset the Spartans 5-4 in OT back in San Jose. The Spartans were looking for revenge. San Jose State started strong, taking a 1-0 lead after the first period, but faded from there. Denver potted a couple goals in the second and third to take the win 4-1.

Coming off the loss, San Jose State faced another familiar foe: the #7 University of Utah Skatin' Utes, this time on neutral ice in Denver. The Spartans had already beat the Utes twice this year, once in San Jose and once in Utah, most recently thanks to the shorthanded, overtime heroics of defenseman Cody Murphy.

"In those games, everyone seems to bring their best game and play their role to guide us to a win," said Mason Console. The third meeting would be no different. After Utah took an early lead (just like the previous two), and a back-and-forth second period, the Spartans controlled the third. Arthur Arias and Mason Console (twice) scored a few of the prettiest goals you'll see, and the Spartans would complete the season sweep of the Utes with a 4-2 win.

At that point, things were looking up. After a stumble, SJSU once again proved that they're capable of competing with some top competition in the West. They'd try to take that little bit of momentum into the game against #6 Weber State, this time in neutral Boulder, Colo. After two periods, the Spartans and Wildcats were tied at 2-2, and SJSU had nearly 5 minutes of power play time to start the third.

The power play had been cold in the last few games, but that major power play put an exclamation point on it. The Wildcats killed it off and seized momentum. Weber State would score three goals and finish it 5-2. There were some bounces here and there that helped Weber, but the Spartans still let that get out of hand.

San Jose State would try to salvage the trip with a matinee game bright and early at 9:15 am against the #4 Colorado State Rams. They didn't.

Instead, they easily had their worst performance of the season. The powerplay ended up getting off the schneid early on thanks to another goal by Mason Console, but that was really the only bright spot. Spartan goaltender Mario Retana looked tired from a long trip and was relieved after giving up 4 goals on 20 shots. After a short night, Justin Linn came in and looked even worse. The Rams dominated the first two periods, taking a 6-1 lead into the second intermission.

The Rams were so confident, they swapped out their starting goaltender. Corson Cramer had been frustrating the Spartans all morning. Third-stringer Danny Jobson: not so much. Jobson quickly let up 3 goals on 5 shots and Cramer was forced to come back in. You do have to give credit to the Spartans here. They did get back in the game, trailing only 6-4 with about 10 minutes left to play.

But then things went to hell in a handbasket. Colorado State scored 4 straight goals to make it 10-4. As time wound down, things got nasty. Spartan Tyler Hutchings delivered a hit from behind, and the Rams quickly answered back with a hit from behind of their own. And that's when things got out of control. Ten players got involved in a line-brawl that caused a combined 202 PIM (counting the 15 DQ's as 10 min each). Here's what that looks like on the official scoresheet online: 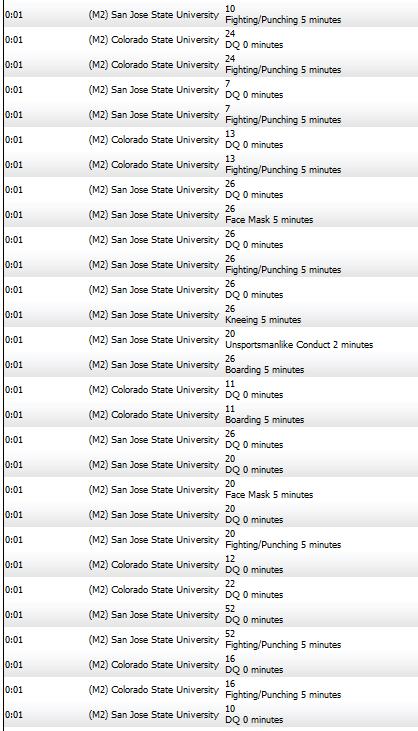 All we were missing were horses, a man on fire, and someone stabbed with a trident.

Getting the brunt of the penalties were Spartans Justin Linn and Mathis Kappeler. Linn earned 2 DQ's, meaning he'll miss the opening weekend of games next semester against the College of the Canyons. Kappeler, on the other hand, earned 4 DQ's. Considering he already had one earlier in the year, and that the suspensions get progressively worse, Kappeler would miss the next 14 games - that would be until game one of Nationals. Luckily for Mathis, he was planning on moving back to Norway anyway.

"I actually don't fight a lot," Kappeler said, while his knuckles swelled on the flight back. "But I kind of like it sometimes." Mathis is a funny, somewhat goofy guy off the ice, but I doubt Colorado State would describe him that way.

The fight aside, the trip was disappointing for SJSU: 1-3 including losses to two teams below them in the rankings. "I just don't think we were prepared," said Mason Console. "Looking back, I think that we were not all mentally ready for this big weekend."

We can only hope it left a bad taste in the mouths of the Spartans that festers over the semester break. They'll have 12 more regular season games to figure themselves out before almost certainly heading to the West Regionals in Utah. "Our team needs to learn that if we play more consistently at the high level we are capable of playing at, we will be successful," said Console.

We'll see how the Spartans respond next semester. Their next game is back home on January 11th versus the College of the Canyons.