It's difficult to evaluate the Sharks' performance last night based on scoring chances alone. After Joe Thornton staked the team to a 2-0 lead midway through the first period, score effects predictably took hold as the Sharks were reasonably content to sit back and allow Columbus to control possession for an extended period. That lead to San Jose being outchanced by the Jackets 7-3 in the middle frame although it was of little consequence as the Sharks added two more goals for an overwhelming advantage on the scoreboard.

Columbus really didn't play that poor of a game prior to the third period but Steve Mason was full value for what's now an abysmal .880 SV% on the season. Sadly for Jackets fans, if Mason had even mirrored Curtis Sanford's extremely average .912 SV% this year, Columbus would have allowed 38 fewer goals and likely have the playoffs, rather than Nail Yakupov, in their sights. The Sharks dominated the third although at that point, realistically, neither team had much to play for which is exactly the kind of atmosphere that lends itself to Dan Boyle dropping the gloves with Derick Brassard. 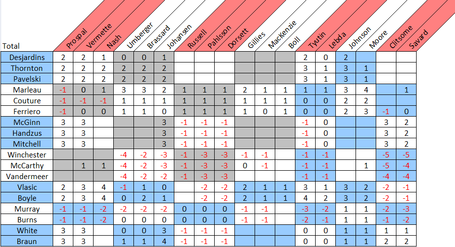 Fourth line really struggled tonight. Wouldn't be surprised if this is the last we see of the Jim Vandermeer as a forward experiment. Murray and Brent Burns had some trouble handling the Rick Nash line in their relatively brief time against them while up front the Thornton line won their matchup against that unit.