Last night's tilt between the Sharks and Blackhawks was a case study in the ebb and flow that often occurs over the course of an NHL game (as well as a case study in a lot of the elements that make hockey great, for my money anyway) with the teams exchanging periods in which they distinctly carried the play. This resulted in a second stanza for the Sharks that was unequivocally their worst of the season from a scoring chance perspective but was thankfully sandwiched between two periods of dominance by San Jose that earned them the 5-3 victory.

The chances-by-period breakdown more or less tells the story here; the Sharks outchanced the Blackhawks 8-5 through twenty minutes and then 9-4 in the final frame but were clobbered 7-1 in the second, marking the first time all season the Sharks have gone an entire period without recording a single even strength scoring chance. Some of that was score effects with the team noticeably sitting back to nurse the 2-0 lead they carried into the period but they continued to lose the possession war badly and hemorrhage chances against even after an offensive outburst by Marcus "Freddie" Kruger (I'll be really disappointed if that isn't his nickname in the Hawks dressing room) tied the score. It wasn't until a little over five minutes into the third that the Sharks were able to sustain any sort of offensive pressure.

Coming into this game, the narrative was that despite having dropped two of three against the Blackhawks this season, the Sharks had played them fairly evenly. While that was true on the scoreboard, we know that the scoreboard can sometimes be deceitful over a three-game sample and the Sharks were decisively outplayed in all three contests, having been outchanced 66-37 and earning just 40.8% of all Corsi events. While the disastrous second period ensured that San Jose was once again outdone possession-wise and lost the chance battle at even strength (but lead on the overall chance count, 18-16, thanks to a wicked power play) it was undoubtedly the team's best effort against Chicago this season and should somewhat assuage fears that a potential playoff series between these two teams would mirror the result of the last one. Although it would also be totally fine with me if Chicago's goaltending decides to remain below replacement-level for the remainder of the season and keeps the Blackhawks out of the top eight. 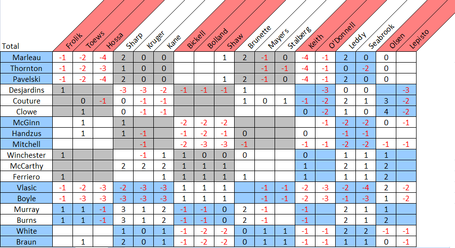 Without the luxury of last change, Joel Quenneville wasn't able to execute his usual line-matching gameplan of throwing the Dave Bolland line to the wolves in order to give Jonathan Toews and Patrick Kane some easier competition but it didn't turn out too bad for the Blackhawks after all with the Thornton line losing the chance battle against Chicago's captain. The Handzus line ended up drawing Bolland as a result and had another poor showing at even strength although it's safe to say Jamie McGinn more than made up for that with his John Tavares-esque power play goal in tight on Crawford.

The pairing of Vlasic and Boyle took quite the beating, especially against Kruger who was generating all sorts of chances last night even beyond his pair of goals.

On an unrelated note, Toews was on the ice for 18 even strength faceoffs in this game. Exactly one of those came in the defensive zone. Now Toews is a terrific player and that's great coaching by Quenneville to give arguably his best offensive player the greatest possible chance to succeed but any type of Selke Trophy talk surrounding Captain Serious this season is entirely unmerited.