The Sharks' PP Turnaround; or, How I Learned to Stop Worrying and Love Regression to the Mean

Share All sharing options for: The Sharks' PP Turnaround; or, How I Learned to Stop Worrying and Love Regression to the Mean

Following last night's hat trick of tallies with the man advantage, the Sharks have now scored eight power play goals in their last five games, catapulting a power play unit that was ranked as low as 17th in the league in efficiency earlier in the season to fourth in the NHL. By comparison, the offensive powerhouse Los Angeles Kings have scored six goals in their last five games, full stop.

So clearly the power play has been kicking ass and taking names as of late, especially relative to their performance earlier in the season, but what's responsible for the turnaround? Did the group really dramatically improve their abilities this much? Was swapping Brent Burns with Logan Couture on the first unit the key to their success? Are the stonecutters at it again? (Who makes Jamie McGinn a star? We doooo...)

The short answer is probably not, but in order to provide a full and accurate response, we need to first determine what drives power play success in the NHL. Thankfully, the unparalleled Gabriel Desjardins looked at that very issue last year and found that 88% of a team's 5-on-4 shooting percentage regresses to the mean. This was very much in line with the findings from JLikens of Objective NHL that around 91% of power play SH% is the result of variance. Since such a substantial portion of a team's finishing ability on the power play can be chalked up to luck, it's hardly surprising that JLikens was also able to show that a team's shot rate on the power play (i.e., the number of pucks they direct at the net while on the man advantage) is a better predictor of their future PP efficiency than their goal rate on the power play.

Does this mean the Sharks' recent spike in power play efficiency was something we could have seen coming and was more or less bound to happen? Thanks to the data-scraping wizardry of the indispensable SnarkSD, we can examine the team's underlying power play performance over the course of the entire season and try to draw some conclusions. Graphs and more after the jump.

First, we'll take a look at the Sharks' cumulative shot rate on the power play this season, expressed as SF/60, which is just the number of shots the Sharks have taken on the PP divided by the number of minutes they've spent on the PP, all multiplied by 60 to give us a nice big number and one that's easy to contextualize from a hockey perspective. Again, this is a cumulative, running total of their performance over the season to date and only includes 5v4 data since the ridiculous shot rates teams are able to accomplish 5v3 really skew the numbers and with how little time teams spend on power play configurations other than 5v4, statistically evaluating those seems pretty irrelevant. 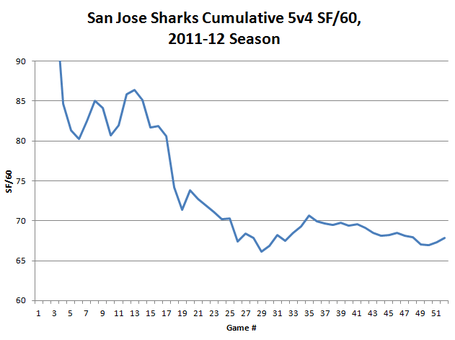 Click to enlarge. The Sharks really put a pounding on the Coyotes on the PP in the season opener which is why that data point is off the chart. Overall, there's a good deal of variance in the Sharks' power play shot rate early in the season as you'd expect in a small sample size (the team really only had a bit over one and a half full games' worth of power play time over the first 15 games of the season) but since about the 23-game mark and really as far back as game 18, they've been remarkably consistent, hovering between 67.3 and 71.4 5v4 SF/60 on the season.

Of course those numbers are useless without context; how do the Sharks stack up against the rest of the league in power play SF/60? Well, they're first in the NHL by a mile at 68.3 SF/60. The next closest team is the Vancouver Canucks at 57.3 SF/60, an average of over 10 fewer shots per sixty minutes of 5v4 time than the Sharks and San Jose is nearly 20 shots per sixty better than the league-average PP shot rate of 49.2 SF/60. In fact, over the past four seasons, only one team has finished the year with a 5v4 SF/60 rate greater than 68.3 and that was the 2010-11 San Jose Sharks at 72.6. This has been an area of dominance for the Sharks since Todd McLellan's arrival as they've finshed 6th, 1st, and 1st in the league his three full seasons behind the bench in San Jose and are on pace to finish 1st once again.

So if the Sharks have consistently been downright elite at power play shot generation throughout the year, and we know that PP shot rate is the best indicator of a unit's talent level, why in the world was the team's PP efficiency % flirting with the bottom third of the league less than a month ago? For that, we turn to the team's cumulative 5v4 shooting percentage this season: 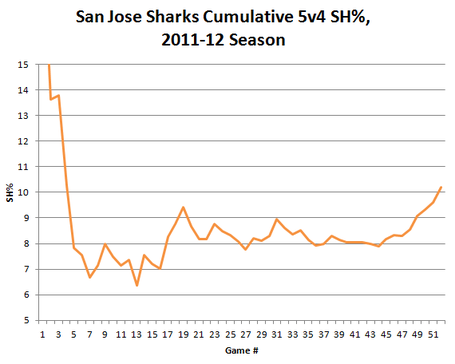 Again, we can disregard the first game against Phoenix for the purposes of this post. As you can see, the reasons behind the Sharks' PP doldrums were entirely to do with horrendous shooting luck. Until about seven games ago, the Sharks' season-long 5v4 SH% was 8.1%. That's exactly what league-average SH% was last season...at even strength.The hockey gods were certainly not enamored with the Sharks' power play for much of the year.

League-average SH% on the power play this year is 12%, which is a bit lower than the 12.8% 5v4 SH% the Sharks have averaged over the past four seasons. With personnel changes and player development, it's impossible to say whether that's exactly where the current group's true talent level lies but seeing as four out of the five players currently comprising the top unit have been in San Jose for the majority of that time period, that's probably a reasonable estimate.

What the Sharks' PP most certainly isn't is one capable of scoring on just 8% of the shots it takes. Over the past four seasons, only the 2010-11 Florida Panthers were able to sustain that inept of a 5v4 SH% over a full season and they were essentially an AHL team after the trade deadline (and lacked any semblance of high-end talent even before). Shooting percentage is fickle and erratic in the short term but over the long haul tends to regress strongly towards a team's talent level, which is usually around league average. Since the team's 4-3 loss to Vancouver last month in which Logan Couture netted a power play marker, the regression has been in full effect for the Sharks at 5v4.

The notion of shot quality is inevitably brought up in discussions like this, the argument being that although the Sharks' shot rate on the power play has been consistent for much of the season, the uptick in shooting percentage coincides with an increase in generation of quality opportunities by the team that they weren't creating on the power play earlier in the season. We can verify that claim using the scoring chance data I've tracked this season. SCF/60 is the same idea as SF/60 but with scoring chances instead of just shots. 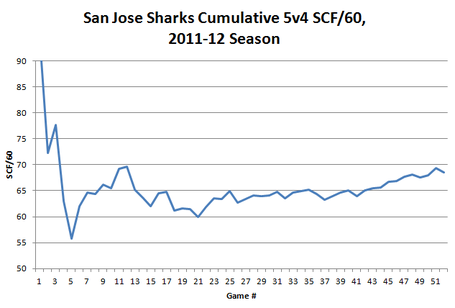 First of all, I consider shots that miss the net from the scoring area to be chances while SF/60 is purely confined to shots on goal which is why although the Sharks' SCF/60 and SF/60 rates are nearly identical at 5v4 this season, that obviously doesn't mean every shot they've taken on the power play has been a scoring chance.

Anyway, if anything, this data shows us that the Sharks have been just as consistent in their generation of scoring chances on the power play this season as they have been in registering shots, if not more so. Since Game 6, the team has never dipped below 59.2 SCF/60 and has never crested 69.3. The fact that team has been averaging more than 2 scoring chances per 2 minutes of PP time on the season is extremely impressive and indicative of how potent their power play has been but there isn't a lot of evidence here suggesting that an uptick in chances is the driving force behind the Sharks' increase in 5v4 shooting percentage. It's certainly something worth monitoring going forward as the team appears to have slightly improved in this category over the last few games but it's only to a level that they were already at earlier in the season and, at that time, nothing was going in on the power play.

Sometimes Joe Pavelski point shots deflect off Derek MacKenzie or Vernon Fiddler and end up in the net, sometimes perfectly executed cross-crease passes collide with the crossbar or are robbed by a netminder's glove hand. It's the nature of the game. Since teams spend so little time on the power play relative to even strength, when unfavorable bounces afflict a team's PP unit, the effects can be exaggerated in the media and elsewhere. The truth appears to be that the Sharks have been the best team in the league this season at the aspect of power play success that clubs can fully control - the rate at which they create shots and scoring chances - while a 5v4 SH% that was in the gutter earlier in the season may have given the impression that the team's man-advantage was in need of an overhaul. Slowly but surely that percentage has been climbing back to league mean although even after the Sharks' recent PP scoring binge, they remain 24th in the league in 5v4 SH%, 2% below league average in that category (yet are 4th in the league in overall PP% - that's crazy). That probably makes it a good bet that the power play will continue to be a significant source of offense for the Sharks down the stretch.

I'd be remiss if I didn't say that the most important conclusion we can draw from this is that the roughly 4,500 fans screaming "SHOOOOOT!" at the top of their lungs during every Sharks power play at the Tank might be smarter than you give them credit for.