It's rather fitting that the Sharks' final opportunity to mount any sort of offensive pressure in an attempt to tie tonight's game against the St. Louis Blues late in the third period was squashed by an ill-advised tripping penalty. While the Sharks have every right to be angry about a soft call on Brad Winchester that gave the Blues their third 5-on-3 advantage of the night in the second period, lazy and undisciplined penalties by Dan Boyle and Brent Burns coupled with a mental error by Andrew Desjardins gave the Blues three overlapping power plays in the first period that they predictably were able to squeeze a goal out of. And when you gift the best defensive team in the NHL a 1-0 lead, the odds are stacked against you.

Perhaps even more important than the barrage of Sharks penalties early in the game was the fact that San Jose's own power play was unable to perform at anywhere near the level of the Blues' when the calls began to even up in the game's latter half. In eight minutes of power play time, the Sharks generated one measly scoring chance while surrendering two shorthanded chances to the Blues. Meanwhile, St. Louis created six chances in just under seven minutes of time with the man-advantage. Although the Blues' totals are inflated by the multiple 5-on-3s, getting outchanced on your own power play in a game that featured a heavy dose of special teams play is no way to win.

We've spilled a fair amount of virtual ink about the Sharks' puck possession struggles against the Western Conference's elite, a group that might be led by the Blues; they've been the best possession team in the league with the score tied and rank second behind the Wings with the score close. And that's what makes the result of this game all the more frustrating as the Sharks were far from steamrolled by the Blues at even strength, earning a greater share of possession and tying St. Louis with 8 EV scoring chances (Full scoring chance summary after the jump). Although the Sharks did go 22 minutes without recording a chance (largely due to spending time killing penalties) and a chunk of their opportunities came late in the second period with the Blues already up 2-0, there's a good chance San Jose could have earned their first win against the Blues of the season had they either played more disciplined hockey or generated anything at all on their own opportunities to skate with the extra man. They did neither and as a result are now 0-3 against a Blues team that they're liable to butt heads with in the postseason if Stanley Cup aspirations are on their minds. 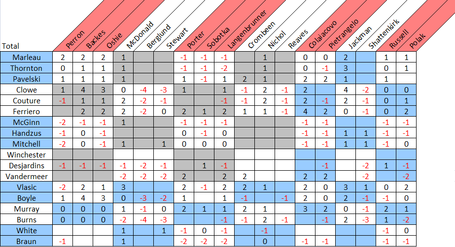 As he usually does, Ken Hitchcock went power versus power in matching the David Backes line against Joe Thornton's. The Sharks trio came out slightly ahead while the Marc-Edouard Vlasic and Dan Boyle pairing had a solid night playing against a mix of the Blues' top two lines.

Patrick Berglund had a terrific night for St. Louis, on the ice for 4 Blues EV chances and no EV chances against while facing the Logan Couture line, the highest scoring chance +/- on either team. He and Langenbrunner were also the only Blues forwards to register positive Corsi ratings. Berglund has had a solid year in terms of moving the play forward while facing the second-toughs but has been bitten hard by the percentages. When those turn, he's going to be a guy to look out for in the playoffs.