Disregarding a pair of opportunities by Tommy Wingels early in the first period with Thomas Greiss pulled for an extra attacker during a delayed penalty, the Sharks didn't record a scoring chance in this game at even strength until almost ten minutes into the second period. Of course, by that point, they were already up 2-0.

Two goals and two assists by Joe Pavelski on a night when the best power play in the NHL erupted for another three goals, an occurrence that's become commonplace as of late, along with tallies by Patrick Marleau, Brent Burns and Ryane Clowe gave the Sharks a 5-3 win over the floundering Washington Capitals in a game in which the Caps had a decided territorial advantage but weren't able to generate a ton of terrific opportunities courtesy of mostly solid defensive positioning by the Sharks. Whether or not spending as much time in their own zone as the Sharks did tonight and still managing to tie their opponent in EV chances is a sustainable feat is a point for debate (a debate that can end here: it's not) but kudos to the team for being able to generally keep the Caps' shooters to the outside tonight.

The Sharks' first scoring play of the night was one that seems to have become a legitimate way to light the lamp against Washington this season. Two weeks after Mikael Samuelsson of the Florida Panthers scored on Michael Neuvrith from just outside the blueline and four days after the Jets' Dustin Byfuglien pounded one in from center ice past Tomas Vokoun, Dan Boyle decided to test the Capitals' third-string netminder Braden Holtby with a genuine, Kenan-Thompson-in-the-Mighty-Ducks-2-style knucklepuck from the red line that found twine after deflecting off Pavelski who was positioned just inside the offensive zone. Greiss ensured the 1-0 lead stood, following up his terrific breakway save on a Brooks Laich shorthanded attempt prior to the Pavelski goal with some impressive work on the penalty kill.

Despite being outchanced 4-0 to begin the period (10-0 dating back to their final chance of the first), the Sharks scored the next two goals of the game as well, both created by their red-hot power play. Pavelski again cashed in, this time on the rebound of a Logan Couture shot from a sharp angle for a goal that poor Doc Emrick believed was stopped by Holtby for a good, oh, twenty minutes after the red light went on. Pavelski and Couture were both involved on San Jose's third goal of the evening as well with Couture deflecting a Pavelski point shot and Marleau shoveling home the resulting rebound.

A Dmitry Orlov buzzer-beater with a second remaining in the middle frame for Washington made things interesting heading in to the third but the Sharks were able to come out and play their strongest twenty minutes of the night, outchancing the Caps 6-3 (Full scoring chance summary after the jump) and padding their lead on the scoreboard which proved useful as late strikes by unlikely contributors in defensemen Roman Hamrlik and Jeff Schultz kept things close well into the game's final minutes.

It's difficult to make a decisive evaluation about the Sharks' play in this game. On the one hand, they were demolished in the possession battle by a team that's been absolutely dreadful at controlling the play at even strength since coach Dale Hunter's arrival. But on the other, they were able to suppress quality chances against and finished the game on a strong note. Perhaps the most important thing, at least in the short term, is that they picked up the two points to keep pace with Los Angeles and remain atop the Pacific Division with games in hand on the teams chasing them. An uneven start to this behemoth of a road trip to be sure, but it's always preferable to have a win in the bank. 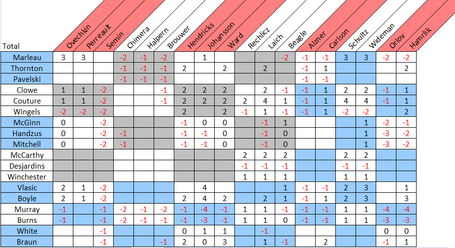 The line combinations I have players sorted by are just the ones the team started with since it wasn't long until McLellan put the ol' blender to good use.

The third line failed to win any of their scoring chance battles and their possession numbers were by far the worst on the team. I probably sound like a broken internet by now but the Sharks really need more talent there, whether that involves adding a player who could push Martin Havlat down to that unit after his return or acquiring a forward for the express purpose of strengthening the line.

Unfortunately another poor game for the Murray/Burns pairing who looked like they had turned a corner.