Share All sharing options for: Sharks own Lightning, lose in OT anyway

Less than thirty minutes after acquiring center Dominic Moore from the Lightning, the Sharks took the ice in Tampa Bay tonight and lost 6-5 in overtime as Martin St. Louis' second goal of the evening with less than 35 seconds remaining in the extra period denied San Jose an extra point in the standings.

Of course, the game was nowhere near as close as the scoreboard would indicate. The Sharks owned the puck for much of the contest, spending virtually the entire second period in the Lightning zone, a frame in which they outchanced the Bolts 12-0 and outshot them 20-4. Overall, the Sharks recorded 28 scoring chances to Tampa's 10, including a 21-10 advantage at even strength (Full scoring chance summary after the jump), and outshot them by the 2:1 ratio of 50-25 marking the first time the Sharks have surpassed the 50-shot mark this season since opening night against the Coyotes.

So how did they end up losing this thing? Well, giving up 6 goals while allowing just 10 total scoring chances usually speaks to deficiencies in goal and Antti Niemi had one of his worst outings of the season. There was nothing much he could do when Justin Braun knocked the puck into his own net on St. Louis' first tally but a SV% of 0.760 for the game is rather abysmal. If it weren't for the Sharks' absolute territorial dominance, there's little chance this game even gets to overtime with that kind of performance in net. You know you've had a bad night when you're out-goaltended by the geriatric and decidedly over-the-hill Dwayne Roloson who's apparently become so old that he's forgotten his usual schtick of furiously shaking off his helmet to draw a stoppage in play at the first sign of trouble, an art he perfected in his days with the Oilers.

The game began with the Sharks' scalding-hot power play generating a wealth of chances before Joe Thornton deftly tipped a Patrick Marleau shot right to an open Logan Couture at the lip of the crease who buried his 24th goal of the season past Roloson. An unfortunate turn of events a few minutes later led to defenseman Douglas Murray taking a puck in the throat during an attempt to block a Vincent Lecavalier shot. Murray left the game and didn't return. With a little over ten minutes remaining in the first, Steven Stamkos, as he often does, snuck away from the check of Andrew Desjardins for just long enough to find himself all alone in front of the net with a rebound lying at his feet. The result was obvious.

The Bolts converted a power play of their own with thirty seconds to go in the opening twenty, with a Teddy Purcell shot from nearly the half-wall improbably finding its way past Niemi. The Sharks would tie the game early in the second as a Michal Handzus offensive-zone faceoff win generated a one-time shot by Torrey Mitchell that created a scramble in front of the net, resulting in a Handzus goal that held up despite the net being slightly dislodged as the puck crossed the goal line. San Jose then entered beast mode, setting up shop in the Tampa Bay zone indefinitely and creating chance after chance. In a cruel turn of events, the first actual counterattack by the Lightning gave them the go-ahead goal as a Steve Downie shot deflected off Colin White right back to the Bolts forward whose sharp-angle blast along the goal line squeaked past Niemi.

Two unlikely contributors enabled the Sharks to re-take the lead soon after, as goals in quick succession by defensemen Marc-Edouard Vlasic and Colin White, who was sitting on a ridiculous goal drought that stretched back to 2009, put the Sharks ahead 4-3 before the end of the second. In a game where every lead was short-lived, so was that one. Just three minutes into the third, Stamkos once again eluded a check as this time it was Handzus caught flat-footed and puck-watching, missing his assignment on the league-leading sniper who received the puck in the slot and wired it past Niemi. Tampa Bay took their third lead of the evening six minutes later as a nightmarish shift for Justin Braun featured a failed breakout pass by the young defenseman that led to a clean zone entry by the Lightning and ended with St. Louis banking the puck off Braun's stick and into the net. After what was an embarrassing second period defensively for the Lightning, the team did a decent job limiting the Sharks' chances for the remainder of the third period. However, a broken play by the Sharks in the neutral zone in which a Dan Boyle pass missed the sticks of Marc-Edouard Vlasic and Ryane Clowe and took the one fortunate bounce the Sharks received all night long onto the stick of Logan Couture who spearheaded a 2-on-1 with Tommy Wingels and the dude with one of the best names in the NHL tied the score to force OT. Wingels had a whale of a night, finishing +6 in EV chances, +14 in Corsi and picking up two points.

As we've seen so often, anything can happen in a single game. A team can play as well as possible but their fate is still at the mercy of the hockey gods. Life isn't fair and neither is hockey; the Sharks experienced that firsthand tonight. It's safe to say Niemi isn't going to let in 24% of the shots he faces many more times, if ever, so if the Sharks can repeat the kind of effort they showed tonight, particularly in that dominant second period, they'll win far more often than not. At any rate, the team picks up the Bettman point to pad their lead on Los Angeles atop the Pacific Division. 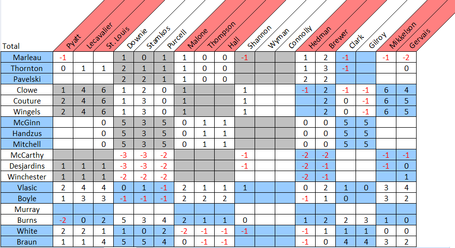 What a game by the Sharks' second line. Having last change, Guy Boucher clearly figured he would have the advantage sending out Lecavalier and St. Louis against the Couture line and boy did he figure wrong. The trio spent about 10 of their 18 even-strength minutes against the Lecavalier unit and ripped them a new one in chances, possession and scoring.

One thing Boucher got right in terms of matchups was targeting the Sharks' fourth line with Steven Stamkos. Something that's always confused me about the way NHL coaches use their forwards is the more or less tacit agreement to exclusively deploy fourth lines against other fourth lines. It seems like Boucher isn't a fan of that tradition as he threw Stamkos over the boards for half of John McCarthy's EV shifts (and a similar proportion of McCarthy's linemates' even strength icetime) with positive results for Tampa Bay.