It's hard to fault the Sharks for hemorrhaging chances against for a stretch in the third period immediately after Marc-Edouard Vlasic and Joe Pavelski, arguably the team's two best players this season, took pucks to the face and left the game (although Pavs would return). Nine consecutive scoring chances by the Red Wings with Vlasic and Pavelski out of commission allowed Detroit to even up the chance count after the Sharks were probably the better team in the second period, outchancing the Wings 10-5, and held their own in a relatively uneventful first.

The two biggest issues, at least from a scoring chance perspective, that prevented the Sharks from picking up their third win against Detroit this season were the Thornton line getting smoked in their matchup against Pavel Datsyuk (a problem that was exacerbated during Pavelski's departure from the ice) and a relatively ineffective game from the majority of the bottom six. 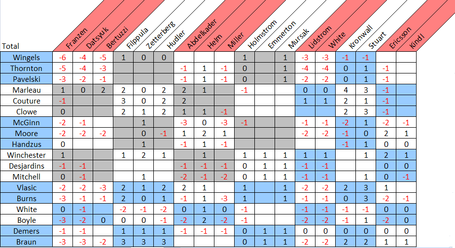 As I mentioned above, the top line didn't have a great time against Datsyuk and company. Wingels was effective when deployed against lesser lights in Tampa and Carolina but I don't think promoting him to the first line in a game where that unit was liable to draw Datsyuk was the greatest of ideas. Wingels ended up spending 9.5 of his 14 minutes of EV ice time against Datsyuk and was decidedly overmatched. Vlasic and Burns took it in the teeth against Datsyuk's line as well as those three players for Detroit caught fire in the third period with Johan Franzen alone generating four scoring chances in about a six-minute span.

The Logan Couture line, meanwhile, was great both in possession and chances against Henrik Zetterberg.

Also, I was late on watching the game against the Hurricanes but I did get around to it and you can access the scoring chances here. No write-up but the numbers are all there.