Weekly Playoff Probabilities and Some Thoughts on Pulling the Goalie

Share All sharing options for: Weekly Playoff Probabilities and Some Thoughts on Pulling the Goalie

This week in addition to posting the updated weekly playoff probabilities I want to address a question often asked, "When is the best time to pull the goalie?" But first let's take a look at the predicted final standings, with some additional notes, and address that goalie question after the jump.

Although the playoff probabilities weren't posted last week I ran the sim to get the movement in the last column which represents the change in playoff probability from 2/11. Big movement for PHX, CGY, and NSH in west, while LA, COL, and DAL lost some big ground. OTT made a huge jump (up 19.5%!), and WPG is looking like they're going to put up a good fight for that last playoff spot. That last spot right now is up for grabs as TOR, WPG, and WSH all have around a 43% chance of making the playoffs. It looks as though PDO will play a big factor in deciding that last spot.

The question of when to pull that goalie has been discussed quite often, as far back as some dudes writing in an operations journal in the mid 70s. Most recently Beaudoin and Swartz, a couple of Canadian statistical professors, detailed the most extensive model I've seen, and came to the conclusion that an average team down 1 goal to an average team should pull their goalie much sooner (somewhere around 3 minutes), and pull their goalie when down 2 with a ton of time left (somewhere around 6 minutes). Because their database is proprietary we can't access it and get all graph happy with it. Instead I used a simplified version on their model; a simple Poisson distribution that neglects special teams. The graph below shows the inflection point at which it makes more sense for the road team down 1 to pull their goalie. (Note my data suggest pulling a little bit sooner). 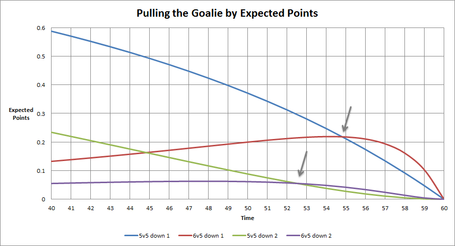 For a detailed explanation of expected points, which is essentially the average "standings points" teams acquire at a certain point in the game, see here.

The perfect example is last night's game against DET. The sharks, like most team's behind 2 goals, were out shooting DET late in the game. However as the graph above indicates, coming up with 2 goals in a short amount of time in the 3rd is improbable. As one might expect the sharks were able to claw to 1 goal behind with 4:44 left. But that lone goal was all they were able to muster. As you can probably guess where I'm going with this, a more aggressive strategy, at least in theory, would have given them a better shot at tieing the game.

If we specifically look at the "down 2 goals" data we can see where the sharks might have opted to take a more aggressive approach. As one might deduce, the risk/reward ratio starts to shift heavily late in the 3rd. A team down 2 that pulls their goalie is more likely to be scored on, but increases (approximately doubles) their chance scoring. Usually they will get scored on, but on occasion they will tie up the game. Around the 6-8 minute mark, a team that pulls their goalie will tie the game up more often than a team that continues to play at even strength.

I'll save methods for the comments section, but please ask away if you have any questions or comments.