Nash, Carter beat Sharks 6-3 instead of being traded

Share All sharing options for: Nash, Carter beat Sharks 6-3 instead of being traded

On Tuesday evening, the Sharks traveled to the capital of Rick Nash Trademania where late healthy scratches of Torrey Mitchell and Jim Vandermeer allowed San Jose GM Doug Wilson to package those two players with Tampa Bay's 7th round pick to acquire the Columbus captain prior to puck-drop.

Okay so that isn't true. But the reality of what transpired tonight in Ohio isn't far off in terms of improbability as the 15th-place Blue Jackets blew out the Sharks 6-3 on the back of Jeff Carter who took a couple of hours off from sulking to pot a hat trick. The Sharks have now dropped four in a row, including four of the five games they've played on the Road Trip From Hell.

The tendency will likely be to blame Antti Niemi for this loss as he was pulled after surrendering three goals and has had a rough go of it in net as of late but it's hard to fault him when Marc-Edouard Vlasic and Jamie McGinn both thought it prudent to abandon the front of the net on R.J. Umberger's game-opening tally, Patrick Marleau chased the puck around the ice in just one of the Sharks' many shorthanded errors leading to Carter's first goal of the contest and Todd McLellan unfortunately ended up with his fourth line on the ice against Nash who proceeded to score after easily slipping the check of Andrew Desjardins.

A lack of discipline, highlighted by Ryane Clowe's unsportsmanlike conduct penalty for slamming the penalty box door, and an awful penalty kill that was frankly rather lucky to yield just two goals against after giving up 11 scoring chances in just 10 minutes of ice time (As always, chances after the jump) were just as big an issue as goaltending in this one and I'd contend they were a bigger part of the problem. Despite the score, the Sharks were the better team at even strength in this game although a lot of that was the result of score effects with the Sharks' most extended stretch of possession that created goals by Joe Thornton and Logan Couture, coming with Columbus already ahead 4-0 and content to cede territory. Overall, this was a game the Sharks would be best served to expunge from their collective memory. There are three games remaining on this road trip, all against teams that have struggled to control the play this season, and sweeping those contests would give the Sharks 9 out of a possible 18 points on the trip; not an ideal haul but more than enough to keep pace with the Coyotes and Kings and stay atop the Pacific. It might be tempting to push the panic button after losses like this but, to keep things in perspective, it's worth mentioning that the Sharks still have over a 95% chance of making the playoffs. So don't jump off the Golden Gate just yet. 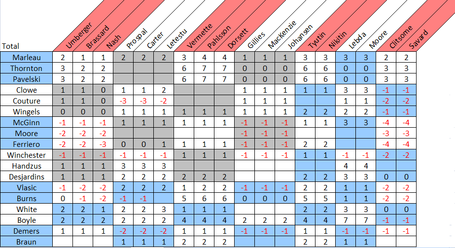 These are just the line combinations that started the game as everything went haywire in that department after the Dominic Moore injury. The Sharks more than doubled up the Blue Jackets in even strength chances, which is what we'd expect with Columbus nursing a 4-0 lead heading into just the second period. As a result, most lines look good here with the notable exception of the third line getting knocked around a bit whenever Todd Richards could get the Nash line out against them. He understandably wanted his best defensive line, the Vermette/Pahlsson/Dorsett unit, out against Thornton and Pavelski whenever he could but they got absolutely smoked.