After serving as the team's whipping boy during San Jose's four-game losing streak and being called out by his coach in a press conference, Antti Niemi turned in the kind of performance that still haunts the memories of Sharks fans from the Finnish netminder's time between the pipes for the Chicago Blackhawks in the 2010 Western Conference Finals. While Niemi's game tonight against the Maple Leafs perhaps wasn't as impressive as his pair of 44-save clinics in that series, mostly because he just didn't have a lot to do for the first forty minutes of the contest, the Sharks' starting goalie stopped 29 of 30 shots, turning aside eight consecutive Toronto scoring chances to begin the third period, helping the Sharks to a 2-1 win (Full chance summary after the jump).

Two second period goals by Patrick Marleau proved to be all the offense the Sharks needed as the team hung on for dear life in game's final frame. I probably sound like a broken internet with how often I cite score effects to explain scoring chance disparities late in a game but that was case again tonight as San Jose wasn't necessarily looking to push the pace offensively, taking a 2-0 lead into the third. As a result, they were outshot 16-9 and outchanced 11-2 in the third period and while that's probably more quality opportunities than they hoped to yield, especially in the period's opening minutes, it's safe to say everything turned out as planned as the team broke out of their slump and earned just their second win of the Terrible, Horrible, No Good, Very Bad Road Trip.

After a low-event first period, Marleau opened the scoring just 32 seconds into the second. With Pavelski off the ice getting repairs done after absorbing a high-stick during the opening faceoff, his replacement Tommy Wingels adeptly forechecked Carl Gunnarsson to work the puck free for Joe Thornton whose pass to Marleau at the left faceoff dot was wired home top shelf. Luke Schenn's interference penalty later in the period allowed the Sharks' sizzling power play to strike again with Marleau tipping a Logan Couture point shot past Leafs goaltender James Reimer. A rare error by Couture helped set up Toronto's only goal of the evening four minutes into the third as a failure by the Sharks center to get the puck deep allowed the Leafs' deadly transition game to work their magic with a Phil Kessel zone entry backing off the Sharks' defense and setting up Jake Gardiner for a shot from the left point that eluded Niemi thanks to a Joffrey Lupul screen in front.

The Sharks win gives them 71 points on the season and ensures that a .500 road trip, at least by points percentage, is still mathematically possible. Wins in Nashville and Minnesota would be key to keeping pace in the Pacific Division, especially after tonight's trade that prevents Sharks forwards from ever again having themselves a field day against the inept defensive (as well as musical) stylings of Jack Johnson. Oh, and that Jeff Carter guy is pretty good at hockey too. 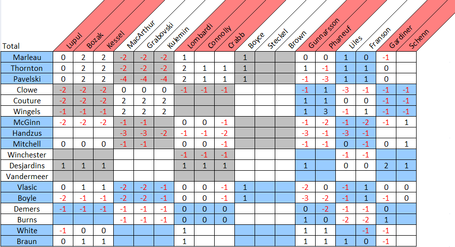 As you can see from the chart, Ron Wilson did his best to hard-match the Mikhail Grabovski line against the Sharks' top line, freeing up Kessel's unit to draw Couture. Both lines for the Sharks lost their respective matchups but, again, the numbers are heavily skewed by the third period when score effects took full hold.

On defense, Justin Braun appeared to have an extremely strong game by eye and the chance data more or less backs that up. His most notable plays were ones that denied Leafs chances from even occurring which squares well with his low-event night in terms of scoring chances as the blueliner was on for just three EV opportunitites total - two by the Sharks and one by Toronto - in thirteen minutes of ice time.