Share All sharing options for: Disastrous start costs Sharks in loss to Nashville

There usually aren't a lot of scoring opportunities to go around at either end of the ice when you play Nashville which generally results in a thin margin of error in games against the Predators. While two meaningless goals by the Preds in garbage time made the score in this one look lopsided, the Sharks really lost tonight's game in its opening minutes courtesy of some shoddy defending against Nashville's often lethal transition game.

After firing a point shot into Jordin Tootoo's shinpads, San Jose defenseman Colin White decided to pursue Tootoo heading back into the Sharks' zone despite the Predators forward already being covered by White's partner Justin Braun. White appeared to recognize the switch too late and a wide-open Colin Wilson received a pass from Tootoo that he ripped past Antti Niemi 2:03 into the first period. Less than a minute and a half later, another odd-man attack by the Predators produced a second Nashville goal. Despite gaining possession following an offensive-zone faceoff, all three members of the Sharks' top line got caught behind the Predators goal line, leaving an activated Shea Weber open for an easy goal on the ensuing transition. Although the Sharks would come back to score two of their own (while yielding an additional pair to Nashville), that was essentially the hockey game less than four minutes in.

Overall, the Predators controlled much of the game's first two periods, leading on the chance count 9-6 (scoring chance summary after the jump) despite only tying the Sharks in shots on goal. Patrick Marleau cut Nashville's lead to 2-1 eleven minutes in after a Joe Pavelski one-timer from the point handcuffed goaltender Pekka Rinne, allowing Marleau to cash in on the rebound. Kevin Klein answered for the Predators five minutes later with his one-timer squeaking through Niemi's pads from a sharp angle and convincing Todd McLellan to replace his starting netminder with Thomas Greiss for the second time in three games. A second period Pavelski goal that was something of a mirror image of Marleau's game-opening tally in Toronto a game ago was cancelled out by a Shea Weber howitzer on the power play. Although the Sharks predictably dominated the shot clock in the third period with the Predators having little incentive to mount an offensive attack, they were less than adept at turning possession into quality chances despite generating a Marleau goal that was waived off due to goaltender interference.

A mostly uninspiring effort by the Sharks in a road trip that has unfortunately been full of them. For the first time in months, San Jose has relinquished their place atop the Pacific Division although, in their defense, they still have a higher points percentage than current leader Phoenix. Even so, closing out the road trip with a win over a very bad Minnesota team tomorrow afternoon in St. Paul is imperative. 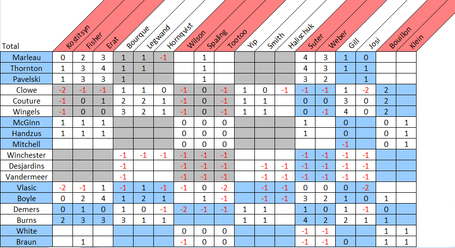 Tommy Wingels who fought Brandon Yip tonight, had another great game, finishing +9 in Corsi (behind only Couture and Brent Burns) and +2 in chances matched up primarily against David Legwand who, in my humble opinion, is Nashville's best center (although valid arguments can be made in favor of Mike Fisher).

The top line won their matchups but unfortunately gave up the first Weber goal. Another ineffective night from the bottom half of the roster. Even with Dominic Moore likely drawing back into the lineup soon and Martin Havlat returning at some point in the future, Doug Wilson might want to look into further shoring up his bottom six before Monday's trade deadline.