An extremely low-event game in terms of scoring chances with just 18 total between the teams. The Sharks' failure to record even a single chance in the second period was a significant reason they were outchanced and eventually outscored. While a performance like this against a fundamentally poor hockey club like Minnesota is concerning, the sky still isn't falling just yet. The Sharks continue to benefit from their power play shooting percentage moving towards league-average which is important since, as we've discussed, no team in the NHL generates as many power play shots as the Sharks (although, despite the Burns goal, their power play wasn't generating much of anything last night). Still, this road trip feels like a missed opportunity with the number of games it featured against bad teams, especially seeing as the schedule doesn't get any easier from here on out with six games remaining against division foes Phoenix and Los Angeles as well as contests against quality out-of-division opponents like Detroit, Boston, St. Louis, Philadelphia and Nashville.

(Apart from Burns' appearance on the best list, it was opposite day.) 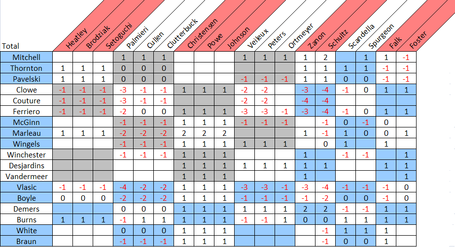 Vlasic and Boyle got ripped a new one against the Matt Cullen line for Minnesota (the brunt of which was shared by Logan Couture and company prior to Couture's injury) while Joe Thornton and Patrick Marleau had more or less split duty versus Dany Heatley and came out on top.