Very solid effort by the Sharks. They ended up hanging on for dear life while surrendering chances late in the game, as we'd expect with them carrying a one-goal lead into the third period, but a better game than we saw from the team for the majority of the road trip. That was thanks in no small part to the newly acquired Daniel Winnik, who spent just under 15 of his incredible 19 minutes of even-strength ice time playing against Hart Trophy candidate Claude Giroux and still managed to finish a team-leading +5 in Corsi, although he was underwater by the chances after spending the final minute of the game on the ice with Ilya Bryzgalov pulled for the Flyers (and making a potentially game-saving shot block on an attempt by Braydon Coburn). Performances like that are what help win playoff games.

(I thought it made sense to exclude the final two chances for the Flyers that were generated with an empty net to make the above lists, which is why they differ from the table below.) 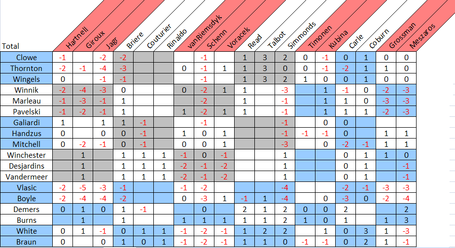 With Todd McLellan out of commission tonight while dealing with concussion-like symptoms (and we sincerely hope he gets better and back to the bench soon) as well as the additions of Winnik and T.J. Galiardi, I was intrigued heading into the game by what we'd see out of Matt Shaw and Jay Woodcroft in terms of deployments.

As I alluded to in the open, they rode Winnik, Marleau and Joe Pavelski. Hard. None of them spent more than four of their even-strength minutes on the ice when Giroux wasn't. Peter Laviolette wasn't pleased with the results and moved Giroux to a line with James vanRiemsdyk and Jakub Voracek in the third period but they continued to draw the Marleau line. I wouldn't worry too much about the minuses Winnik ended up accumulating, since two of those chances were essentially shorthanded with the Flyers playing 6v5 - it was a very effective performance by that unit hard-matched against one of the best centers in the world.

That matchup freed up the Thornton line to take advantage of some of the Flyers' lower lines although describing them as "lower lines" isn't really fair to the talent level present - Philadelphia has some ridiculous forward depth, maybe the best in the league. Wingels had another really strong game while, on defense, Jason Demers looked like the Demers of old - physical, pinching effectively and consistently moving the puck north, helping him win his matchups and finish +2 in chances.