I usually try to avoid the Sharks pre-game show at all costs but my DVR picked some of it up last night and the panel was inexplicably discussing potentially trading Joe Pavelski at the deadline. To be fair, it wasn't a topic that was lingered upon but trading Pavelski would, of course, be an incredibly terrible decision and I feel fairly confident in stating that it will not happen seeing as Doug Wilson is a sane individual. Although the puck hasn't always gone in for him and his linemates so far this season, Pavelski was probably the Sharks' best forward of the first half, as he consistently drove the play north and generated scoring chances at an elite rate despite starting in his own zone more often and facing tougher competition than any other Sharks forward.

Hopefully anyone contemplating the trade of Pavelski as a real option was watching last night as Pavs put on a show, dominating the Stars to the tune of six scoring chances to one when he was on the ice at even-strength (five of which came off his stick) in addition to winning six out of seven faceoffs, a category in which he now ranks second in the league behind Jonathan Toews (albeit with the caveat that he's taken far fewer draws than most of the league leaders having lined up at right wing for much of the season). Overall, the Sharks posted one of their most dominant performances of the year, outchancing Dallas 19-8 at evens, 21-10 overall and allowing zero chances against in the second period - despite Dan Boyle shooting the puck into his own net - marking only the third time this season San Jose has held an opponent chance-less in a period. 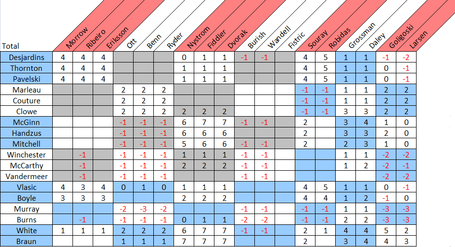 The third line had one of their finest games of the season which isn't particularly surprising when you consider that the line they were matched up against has been atrocious in terms of scoring chance differential this season. Great to see the top two lines handily win their matchups against the top two lines for the Stars. Brent Burns was better than his chance differential would indicate as he had the misfortune of being on the ice a bunch late when the game was already out of hand and the Stars registered a trio of late chances.