Share All sharing options for: Defensive errors cost Sharks in loss to Phoenix

You wouldn't necessarily expect a tilt with the Phoenix Coyotes to be a high-event affair but with 38 scoring chances between the teams over the course of the evening, it was exactly that. Although the Sharks had a greater share of possession early in the first period, the Coyotes really carried the play by the chances, outchancing the Sharks 8-2 in the game's opening twenty minutes in addition to a couple of shots from the outside that rang iron courtesy Gilbert Brule and Adrian Aucoin.

San Jose turned the tables in the second, registering 12 chances to Phoenix's 7 including a 4-0 chance run to open the period that ended with a Logan Couture goal as the All-Star center deflected a shot from Ryane Clowe at point-blank range then converted the rebound. Phoenix would tie the game just 32 seconds later as, despite Michal Handzus winning a neutral zone faceoff, the Sharks ceded the blue line and Dan Boyle failed to pick up Raffi Torres who roofed the puck over Antti Niemi to end a lengthy shutout streak for the Sharks netminder.

The Coyotes took a 2-1 lead 9:21 into the period as a tenacious forecheck by Boyd Gordon stripped the puck from Colin White behind the net and allowed Shane Doan to set up a wide open Lauri Korpikoski for a one-timer that found twine. Adrian Aucoin would punch Torrey Mitchell in the head a little over a minute later putting the Sharks on the man advantage and a power play that's been dominant at generating shots and chances all season long but is finally starting to see the fruits of their labor manifest as of late connected once again as Jamie McGinn deflected a slap-pass from Brent Burns past Mike Smith. The game would stay tied until a disastrous line change for the Sharks gifted Phoenix a 2-on-1 with Ray Whitney setting up Martin Hanzal for a goal that deflected off Burns' stick and into the net.

Despite score effects suggesting that the Coyotes would likely sit back and play conservatively in the third, they ended up outchancing the Sharks 5-3 while both goalies were in net, doing an excellent job of limiting the Sharks' opportunities while picking up an insurance tally from Korpikoski that would prove to be the game winner. Though San Jose did end up outshooting Phoenix 35-24 and got a late goal from Patrick Marleau to close the gap on the scoreboard, it's tough to win in the NHL when you give up 20 scoring chances (Full chance summary after the jump). The offense was there for the Sharks but poor defensive coverage and a few ill-advised errors ended up burning them. 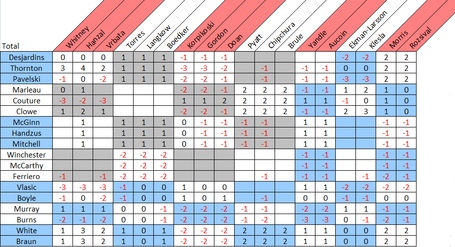 Reader Timorous Me brought up an excellent point in the comments of the scoring chance recap for the Stars game, noting that Brent Burns and Douglas Murray have been getting clobbered for pretty much the entire duration they've been a pairing. Including tonight's poor showing, Murray has been outchanced 34-22 (0.393 chance ratio) at even strength while Burns has been outchanced 38-24 (0.387) at evens in the six full games for which they've been paired (excluding the Oilers game in which Burns got injured). In contrast, Burns' chance ratio over the rest of the season was 0.601 while Murray's was 0.508. Hopefully Jason Demers is available to draw into the lineup soon as some of his best hockey of the season came while paired with Burns. Even without Demers, it might be time for the coaching staff to return to Vlasic/Burns and Murray/Boyle with the former facing top competition this time.

As for the rest of the team, Dave Tippett ensured that Martin Hanzal received a steady dose of Joe Thornton and Jumbo performed really well in that role as it was unfortunately Logan Couture who struggled to drive the play in the little time he spent against Phoenix's top line although he made up for it by being the only member of his unit to finish on the positive side of the ledger against Shane Doan. Kudos to the third line for holding their own by the chances (albeit not on the scoreboard) against a very underrated two-way center in Daymond Langkow.