Happy Pigskin day everybody! I should mention that as you read this post, Soloact has a great complimentary post with running magic and tragic numbers that's worth reading as well.

We're looking at the playoff picture based on score adjusted Fenwick% again this week (with a minor correction). I also wanted to pick up on something I had posted earlier in the year when we looked at how SJ has compared to the elite teams in the west. This time I added a team by team comparison, as well as plotting expected fenwick% to see which teams SJ has performed well against. Tables and charts after the jump.

The race for the Atlantic division crown is the most competitive divisional race this year with 3 teams locked up in battle. PIT, NYR, and PHI are all but tied, winning the division in 35%, 34%, and 26% of sims respectively. I thought the central would be really competitive down the stretch, but it looks like DET is starting to pull away, winning it in 65% of sims.

The Sharks are in about the same position they were in at the start of the week, and continue to look like the team to beat in the pacific winning the division in 87% of sims. They also show a slight increase in winning the west (8%) and league (6%). 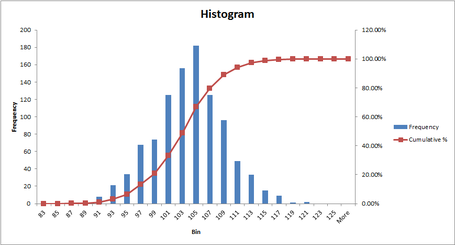 I kept track of SJ's points (for 1000 simulated seasons) so I could come up with this histogram. From above we see that SJ had a mean of about 104 points, they're standard deviation was 5.12. Theoretically they're 95% Confidence Interval would be between 95-115 points.

Switching gears, let's look at how SJ has performed this year against sub-sets of competition.

A few weeks ago after SJ was pummeled by CHI I took a look at some of the advanced numbers behind SJ's game against top talent. SJ has had some modest improvement over this time. But the numbers are ultimately about the same. This time I also included a team by team comparison, and things begin to look a bit clearer. For starter's the major driving factor behind SJ's low fenwick% against top teams is how badly DET has out shot SJ. A lot of this has to do with score effects. Although I haven't run the numbers, I'l bet when you look at SJ vs. DET in game close situations (within 1 goal through 2 periods, tied in the 3rd) the numbers aren't nearly as off.

I also decided to chart SJ's opponents average fenwick% close against, vs. their actual EV fenwick% to see which teams SJ seemed to be outplaying, or underplaying. Things actually seem pretty consistent. What this chart really brings to the clear is that SJ's toughest competitors this year have been DET, CHI, and (surprisingly) COL, who are having a bit of an unlucky year. While mostly destroying PHX and MIN, again score effects playing a big role here. Maybe with time I'll limit the results to score close situations, which should give us a clearer picture. 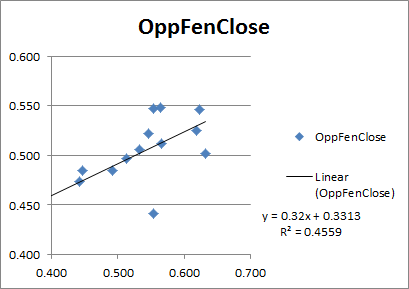