For the second game in a row, the Sharks faced a team notorious for being defensively stingy and yet, for the second game in a row, the Sharks found themselves in something of a barn-burner. After trading a total of 38 scoring chances with the Coyotes on Saturday night, the Sharks and Flames combined for 41 chances last night with San Jose edging out Calgary in the chance count, 21-20, courtesy of a late surge but falling short on the scoreboard, 4-3. To break it down by game state, the Sharks outchanced the Flames 20-17 at even strength and 8-7 when the score was tied. All three games between these teams so far this season have been very closely contested both on the scoreboard and by the chances which isn't a point in the Sharks' favor considering that, at least on paper, these should be games San Jose dominates. 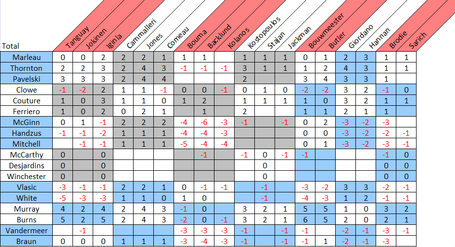 Benn Ferriero began the night on the top line but McLellan was quick to swap him with Patrick Marleau once things headed south on the scoreboard. Marleau and the Joes came out ahead in the chance battle against the Jarome Iginla line as the Logan Couture unit ended up being most frequently victimized when Olli Jokinen decided to do his best Sam Gagner impression. McLellan also began double-shifting the top line with the Sharks trailing late in the game so they were able to beat the Blair Jones line into a pulp as well. For the stat-nerds, Thornton and Pavelski each finished +15 in Corsi on the night and although some of that is obviously the result of score effects, it's still mighty impressive.

The third line continued their Jekyll and Hyde season (more Hyde than Jekyll lately) by getting creamed against the Mikael Backlund line for Calgary. It's a shame Frans Nielsen is now off the trade market because he's exactly the type of possession monster that unit could use (although I imagine most teams around the league could use a guy like Nielsen).