Over the final nine minutes of the second period, the Sharks were outchanced 7-0 by the Coyotes and surrendered two of the game's three goals. If there's a span of time during which this contest was lost for San Jose, it's hard to pinpoint a better one.

Despite a dominant first period, poor defensive coverage by the Sharks in the latter half of the middle frame cost them the game, as well as the oh-so-valuable two points, against a divisional opponent directly ahead of them in the standings. It was one of the team's weakest efforts of a stretch that's been filled with losses.

A series of failed attempts to clear the zone on the part of the Sharks culminated in a Michael Stone point shot with the resulting rebound kicking out to Mikkel Boedker who had been left all alone in the slot by Michal Handzus. Minutes later, the Coyotes' fourth line (which is comprised by two guys so terrible the Edmonton Oilers cut them from their lineup) struck again. Dominic Moore threw a seemingly blind pass into the slot from behind the Phoenix net, inadvertently feeding the Coyotes' transition game which allowed them to enter the zone and set up a Keith Yandle point shot. Gilbert Brule couldn't pound home the rebound but Marc-Antoine Pouliot set up a wide-open Stone for his first NHL goal. Noted excrement particle Raffi Torres staked Phoenix to a 3-0 lead seconds into the third but with the Yotes already carrying a two-goal advantage into the final period, the result was more or less decided during the second intermission.

There really isn't much more to say about this game. There are some positives to draw upon; the Sharks were excellent in the first period, outshooting Phoenix 16-9 and outchancing them 6-2 (chances after the jump) but weren't able to recover from a dreadful 10-minute stretch in the second. The overall shot count (and chance count, to a lesser extent) in this game is extremely deceiving as the Sharks' 40 shots were largely the byproduct of score effects, with 17 of them coming when the game was well out of reach in the third period. As much as the Sharks haven't been nearly as poor as their record over the last month would indicate, efforts like this against a team they're chasing in the standings (not to mention one playing without arguably their best player in Martin Hanzal) can't happen at this point. 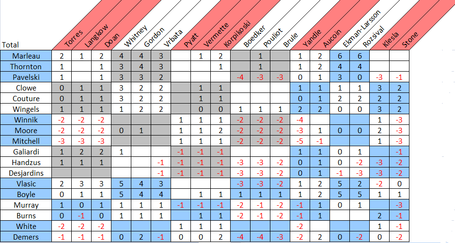 Joe Thornton and company were probably pretty stoked about having to deal with Boyd Gordon instead of Hanzal in this one. Marleau was a ridiculous 7-0 in chances as the entire line stomped on Phoenix's two best wingers in Ray Whitney and Radim Vrbata. Unfortunately, Joe Pavelski ended up giving most of it back, or at least contributing to the giveback, when he was caught on the ice against the Coyotes' fourth line.

It didn't manifest on the scoreboard, but the Moore line didn't do very well against the Shane Doan line for Phoenix even though they didn't play all that much head-to-head at evens. Regardless, the coaching staff's use of that trio against opposing top lines is very much a work in progress it would seem.