Share All sharing options for: Score%: Additional Context to Contemplate

If advanced statistics is your brother's/cousin's/son's/daughter's T-ball league then the"Most Improved" trophy this year has to go to score effects (often used to describe the goal state of the game, eg. leading, trailing or tied). With Gabe's release of Fenwick% by score doors were opened for analysis of team wide score effects. In addition a lot of insight (shameless self-plug) was brought to in-game momentum and strategy through a look at expected points by goal differential. Although I'm leaving out a lot of great work, the articles I found most compelling this year were JaredL's look at how the extra bettman point influences in-game strategy, and Eric T's expansion of fenwick through SAF. There has been significant discovery of the influence of score effects, which now has become an important qualifier to any discussion during in-game and post-game analysis.

Last year saw a lot of work done on zone%, and with the recent surge of information on score effects, I thought about bridging the two. Zone% (aka zone starts) give us a lot of information about how coaches deploy their skaters, what role a skater may play on a team, and how those starts give context to other statistics. We can employ the same methods used to generate zone starts as we do with score effects. That is, take a percentage of the faceoffs a player is deployed at with respect to goal differential. For now I'm just calling this score%, although I suppose score starts could be synonymous. Due to time constraints I'm doing things a little backwards by looking at the sharks players first without confirming the existence of league-wide score%, suffice to say I'm assuming they exist and providing individual information first, then going back to examine league wide trends later. What I hope to see is some similar information provided by zone starts; what role players play, how coaches deploy those players, and how score% can give context to "traditional" and "advanced" stats (BTW I didn't make up the name "advanced stats", and I agree with some of you that it could be construed as pejorative).

This article will be a continuation of our look at deployment, (albiet backwards). In addition I feel this is a great time to address a concern often voiced by fans about the sharks system. The "making other goalies look good" concern, which may just be a reflection of score effects and the sharks overwhelming possession dominance while trailing. Pants first, then shoes...

On the y axis I have plotted score%, which as mentioned above is the percentage of faceoffs a player takes when a team is leading (while excluding score tied face-offs). The bar in the middle represents team average. I think of it in simple terms of offense vs. defense. A coach is far more likely to deploy a player with offensive talent when behind (ie. when the team needs goals) then when ahead. Likewise coaches will probably deploy players will defensive talent when ahead (ie. when the team needs to keep the other team from scoring).

On the x-axis I plotted CORSI Rel QOC, I could have used zone starts, but choose CORSI Rel QOC because the sharks have been a line-matching team (although it sure seems like the 3rd line is trending toward zone matching). Again the middle bar being team average. In the last article I suggested line-matching and zone-matching might be mutually exclusive for forwards, which there was marginal evidence for, and certainly no evidence when it comes to defensemen. I don't believe that to be the case here. Obviously CORSI Rel QOC and Score% can coincide (are not mutually exclusive). The size of the bubbles here indicate zone starts.

Looking at the graphs above, nothing really that surprising for the sharks. I limited players that have >300 faceoffs in total, I think this is where we can comfortable say that score% is reliable. T Mac leans heavily on the top 6 F while ahead and behind. Which is what we also found when exploring zone starts. The interesting thing here for me is the variability in the defense. Clearly the coaches think about splitting up the pairings by goal differential. Murray and White are out for faceoffs when the team is ahead far more often than while behind. And likewise Burns plays more when the Sharks are behind. This data definitely fits with my expectations, which is always a good thing when exploring a new stat.

Here is the raw data for the sharks. The first set of columns represent number of faceoffs (independent of strength and zone) given the goal differential. Then the total of those columns. 1s is looking at only 1 goal ahead and 1 goal behind. I excluded tied data for this entire article in order to get a better sense of score%, and to limit confounding. The z-score in the last columns represent the standard deviations a player is away from the team mean . Think of z-score as a rank, just with added information about how far apart each player is within that rank. Here a negative z-score indicates a score% well below the mean, ie. a player who takes a lot of draws when behind, and vice versa for a positive z-score. I provided 1s and total because I wasn't sure which was going to be more useful. Now that I have the data, I think the total score% provides more data, and is therefore more reliable, and a better indicator of true score%.

Lastly, I'll give some context to the sharks by looking at the master of zone starts disaster Align Vignot; 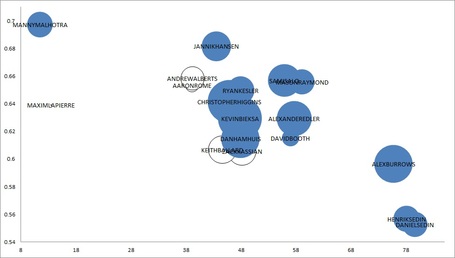 This time I plotted zone start% on the x-axis, as VAN tends to be a zone matching team. Well, they are the zone matching team. Here we see that not only is Malhotra taking a ridiculously low amount of face-offs in the defensive zone, but he also takes them close to a 3 out of 4 clip when VAN is ahead. Given this information, we can easily see that he is a far, far, better player than his numbers (CORSI, Points, etc.) might otherwise indicate.

OK, whew, now onto a brief discussion of score effects and the Sharks.

We know a hell of a lot of the game can be traced to score effects. JLiken's and Gabe first began investigating the relation between shooting percentage (how many of your shots go in the net) and score effects back in 2009 and uncovered that it probably increases as teams have the lead, but essentially remains the same while behind. You can speculate all you want on why this happens, but it's probably multi-factorial. Now that we have close to 5 years worth of data, we can analyze score effects with additional clarity. The emerging trend seems to be that teams that are behind control possession in a score dependent step wise fashion. As I said earlier, I believe (although not totally convinced, and I think this needs further analysis) teams maintain a relatively similar shooting percentage when behind, even though they are pumping shots on net. As many of you know, this has been the montra during the McLellan era, but at times comes under fire. Before we jump into a discussion of the sharks system, I think it's good to give some context. Below is the time on ice (TOI) both home and away by goal differential.

Something totally peculiar stands out here, do you see it? Despite a winning record the sharks have been playing down a goal more than up a goal, none the more striking than the difference between up 1 goal and down 1 goal. I think this really speaks to the sharks season thus far. I leave you to consider if that is due to "not showing up at the start of the game" or "luck." Despite this hole the Sharks as a team have been absolutely dominant in possession when down a goal compared to league average. In fact they are currently (when this was written) only 2nd to the beast of the central, STL. If possession stats don't speak to you, take Goals For/60 TOI, where the sharks are also elite at 3rd in the league. If your of the mindset that teams must be limiting the sharks "shot quality," again, I'm not seeing that either. From the table below, the sharks are scoring at the exact same percentage tied as they are down 1.

So why does it always seem like the sharks are "making the goalie look good?" I think it's the natural way we watch the game. Down 1 is stressful and comes often at the end of the game with points on the line. Yes the sharks pepper the goalie when down 1, but this is mostly due to score effects, as all teams out-shoot their opponents when down 1. On top of that the sharks play in a system that encourages shots of all types on net, with clear success. Despite being elite, they don't always score to tie the game up, thus leaving us with a bitter taste in our mouth. We remember the games when the sharks lost while badly out-shooting the other team, and we don't remember the games when the sharks evened it up quickly. Again, they didn't badly outshoot the other team because of some unforeseen superiority, its the natural flow of the game, as the game significantly changes by score effects.

Unfortunately the sharks have been damn near the opposite when up a goal. Their posession numbers are decent, but not nearly as good (as compared to league average), and their Goals For/60 TOI is horrendous. This further augments our understanding of the sharks, as they do seem to put way more shots on net when down a goal as compared to up 1. And because they are more liklely to lose down1 than up 1, this unsettles us. Basically, what I hope you can see is that score effects significanty influence both possession and "traditional" numbers, and you have to take context into account when looking at at shots and goal data. I might even go so far as to say it's not the down 1 that's been the problem. It's constantly starting behind, and not putting teams away when up a goal.

That being said, the current fall is out of the bounds of normal. Losing streaks are expected, but 2 months of poor play starts impinging on a tired rhetoric of puck luck, bounces, or whatever u want to call it. This team has got to find a way to finish if they want a seat at the dance in April.