Share All sharing options for: Sharks snap losing skid with 3-2 win over Edmonton

The streak is over. At least for one night anyway. The Sharks earned their first victory in nearly two weeks with a 3-2 triumph over the Edmonton Oilers that "vaults" them, using the loosest definition of that word possible, to 9th place in the Western Conference with 77 points, one greater than the Flames who they face in Calgary tomorrow. We've mentioned before that despite the Sharks' PDO-driven struggles, there's no guarantee the percentages rebound for them this season with such a minimal slate of games remaining. But that doesn't mean we can't hope this is the start of that process.

Ironically, despite the caliber of opponent, the Sharks probably didn't play as well tonight as they did at times during the losing streak - the games against Dallas and Buffalo certainly spring to mind - but the two points are all that matter anymore and a power play that had been generating chances but rolling snake eyes coming into this game delivered two goals off the sticks of Joe Thornton and Logan Couture. Torrey Mitchell, who was fantastic tonight (and has been for a number of games now), finishing +4 in chances (as always, after the jump) and +9 in Corsi - both tops among forwards - scored the other just over a minute into the hockey game.

Both Edmonton goals came as the result of less-than-terrific plays by Brent Burns. After a great start to the game, the Sharks were largely passive for much of the first period following the Mitchell goal. With the teams skating four-on-four to close out the frame, Burns drove the net on a 3-on-2 rush by the Sharks but wasn't able to return to position in time to prevent an outlet pass by Nick Schultz that spearheaded a 2-on-1 by Edmonton the other way. Although Burns recovered in time to effectively negate Ryan Jones as an option, a blast by Ryan Whitney beat Niemi to tie the score. With the Sharks nursing a 2-1 lead in the latter stages of the second, Burns fired a point shot into Taylor Hall's shin pads that predictably led to the explosive winger breaking away and scoring on Niemi. Overall, Burns finished -4 in scoring chances and as a result was stapled to the bench for the final 5 minutes of the second period.

The Sharks weren't perfect by any means but they didn't need to be to post the W and they probably won't need to be tomorrow night either as the Flames, despite their place in the standings, really aren't much better than their Alberta rivals. Still, improved efforts from Burns and Couture, who still looks hobbled by the injury he sustained in Minnesota and wasn't his usual dominant-in-three-zones self despite netting the game-winner, can only help their chances going forward. 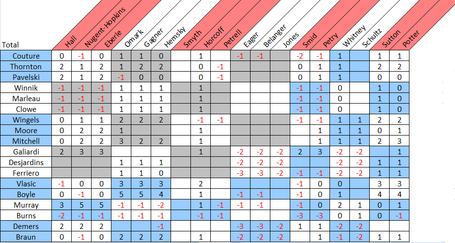 The Marleau line might be a bit underrated by the chances - they fared quite well on the possesion front but weren't able to generate many quality opportunities out of it. Considering they spent a whack of time against the young guns line for Edmonton, that in itself is an acceptable result. Mitchell has been playing extremely well of late and it was good to see him rewarded again with a goal. His line was able to keep Sam Gagner's in check for much of the night.