Last week, the Worcester Sharks {26-23-4-7 with 63 points} continued their five game home stand by hosting a three-in-three weekend at the DCU Center. Unfortunately for the Sharks, their home woes continued as they lost two-of-three to fall below .500 on home ice {13-14-0-2} and are now one of three teams in the AHL to have a losing record at home.

Despite the home woes, the Sharks trail the Albany Devils by only one point for the eighth spot in the AHL Eastern Conference playoffs and trial the Manchester Monarchs by two points for the seventh spot. While the Sharks do have games in hand, the Sharks are tied with the Adirondack Phantoms for ninth and hold a slim lead over the 10th-14th place teams {Portland Pirates and Springfield Falcons have 62 points; Providence Bruins have 61 points; Syracuse Crunch have 60 points}.

On Friday night {March 9}, the Sharks hosted the Pirates in their 10th meeting of the season and skated away with a 6-4 victory. Curt Gogol, Brandon Mashinter, John McCarthy, Tony Lucia, Nathan Moon and Tim Kennedy scored for the Sharks while Tyson Sexsmith {12-11-2-7, 2.19 goals against average, .922 save percentage} stopped 38-of-42 shots.

Gogol gave the Sharks an early 1-0 lead with his fifth goal of the season just 28 seconds into the game. Winning a battle for the puck on the end board on the left side of the Pirates zone, Gogol skated behind the Pirates net and stuffed the puck through the pads of Pirates goalie Justin Pogge from behind the goal line on the right side for the goal. Ryan Del Monte was credited with the assist.

Mashinter extended the lead to 2-0 with his team leading 15th goal of the season at 12:43. After Kennedy won a face-off in the right face-off circle of the Pirates zone, McCarthy cut through the face-off circle to corral the puck and fired a backhanded shot on net from the right corner. Pogge made the save but left a rebound that Mashinter, who was positioned right on top of the goalie crease, knocked into the net on the glove side for the goal.

Pirates forward Brett Sterling cut the Sharks lead in half 59 seconds later with his 24th goal of the season. Winning a battle for the puck on the left half wall in the Sharks zone, Pirates forward Andy Miele got the puck out to the top of the left point to Pirates defenseman Mathieu Brodeur, who fired a quick shot on net. Sterling, who was positioned inside the right face-off circle, was able to get a piece of the puck and deflected the puck past Sexsmith for the goal.

Pirates forward Evan Bloodoff tied the game three minutes later at 16:42 with his fourth goal of the season. Corralling the loose puck in the left corner of the Sharks zone, Bloodoff skated behind Sexsmith's net and stuffed home a wrap-around shot on the right side from behind the net for the goal. It was a goal that Sexsmith wanted back as he was guarding the near post with his pad down.

McCarthy tied Mashinter for the team lead in goals with his 15th goal of the season at 19:23 to give the Sharks a 3-2 lead heading into the first intermission. Skating through the middle into the Pirates zone on a 3-on-2 rush, Kennedy passed the puck over to the right face-off circle dot to McCarthy, who fired a quick shot on net that beat Pogge on the blocker side for the goal. Sexsmith was credited with the secondary assist.

Despite pulling Pogge for backup goaltender Peter Mannino at the first intermission, the change had no effect on the Sharks as Lucia extended the lead to 4-2 with this fifth goal of the season just 1:49 into the second period. With the puck behind the goal line on the right side of the Pirates zone, Sharks defenseman Sena Acolatse fired a backhanded shot on net that hit off of Lucia and landed in the crease. Lucia got knocked down by a Pirates defender into the crease but Lucia was able to kick the puck towards the net from on his side, and the puck went off the stick of a Pirates players and past Mannino for the goal. Moon was credited with the secondary assist.

Moon extended the Sharks lead to 5-2 with his 10th goal of the season at 15:27. With tremendous pressure inside the Pirates zone, Sharks forward Jack Combs fired a no look, backhanded shot on net from behind the goal line near the left corner that deflected off the skate of Moon, who was positioned right on top of the goalie crease, and through the pads of Mannino for the goal. Sharks defenseman Matt Pelech was credited with the secondary assist.

Sharks forward Jimmy Bonneau dropped the gloves with Pirates defenseman Mark Louis at 16:50 in a 20 second tilt that ended when Louis lost his balance and fell to his knees, which allowed Bonneau to drill him with several solid rights before being separated by the linesmen. The fight was Bonneau's 20th of the season.

Pirates forward Ashton Rome cut the Sharks lead to 5-3 with his fourth goal of the season at 2:45 of the third period. Taking the puck away from a Sharks player on the left half wall of the Sharks zone, Rome curled to his left and fired a snap shot on net from the left point that beat Sexsmith for the goal.

Kennedy answered back for the Sharks with his ninth goal of the season at 6:44 to extend the Sharks lead to 6-3. Stealing the puck inside the Sharks zone, Mashinter skated through the middle into the Pirates zone and left the puck on top of the right face-off circle for Kennedy, who skated deep into the right face-off circle and fired a snap shot on net that beat Mannino top shelf for the goal. McCarthy was credited with the secondary assist.

Rome scored his second goal of the game at 16:49 to cut the Sharks lead to 6-4. Taking a pass at center ice, Rome skated into the Sharks zone on the right side and fired a quick snap shot from the right face-off circle dot that beat Sexsmith for the goal.

The Pirates had a golden opportunity to tie the game late in the period with a 6-on-3 power play advantage after McCarthy and Kennedy were called for slashing and tripping at 17:23 and 18:11 respectively. However, the Sharks penalty kill units and Sexsmith were up to the task and held down the fort.

For the game, the Sharks were outshot 42-38, were 0-for-2 with the man advantage and 6-for-6 on the penalty kill... Ben Guite {inj}, Frazer McLaren {inj}, Cam MacIntyre {inj}, Andrew Murray {inj}, Brian O'Hanley {scr} and James Sheppard {scr} did not dress for the Sharks... Mashinter extended his point streak to five games {4-2-6} while Kennedy extended his to four games {3-4-7}... Moon became the third Shark in history to have 10 goals and 10 fights in a season. 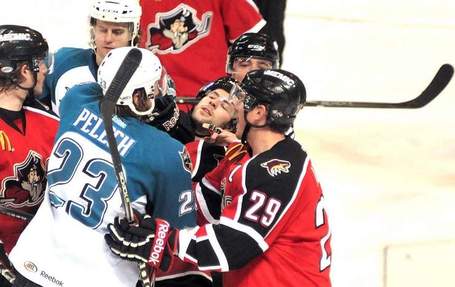 In the only highlight of a scoreless first period, Mashinter destroyed Bruins defenseman Nathan McIver with repeated right hands in a spirited scrap at 10:32. The fight was Mashinter's sixth of the season.

Bruins forward Kirk MacDonald gave the Bruins a 1-0 lead with his sixth goal of the season at 12:25 of the second period. With the puck inside the Sharks zone, Bruins defenseman Andrew Bodnarchuk fired a shot on net from the point that MacDonald, who was positioned on the door step, deflected in for the goal. As the bruins were celebrating MacDonald's goal, a scrum broke out that resulted in Gogol dropping the gloves with Bruins forward Kevan Miller at center ice. The fight was Gogol's 16th of the season.

In the third period, the Sharks fired 12 shots on net but couldn't get the puck past Bruins goalie Michael Hutchinson. With 86 seconds remaining in the third period, Sexsmith was pulled for an extra attacker but Bruins captain Trent Whitfield scored an empty net goal, his fifth goal of the season, at 19:56 to seal the Bruins win.

For the game, the Sharks outshot the Bruins 34-30, were 0-for-4 with the man advantage and 5-for-5 on the penalty kill... In their last seven games, the Sharks are 0-for-27 with the man advantage and 2-for-43 in their last 10 games {courtesy of www.sharksahl.com}... Guite {inj}, McLaren {inj}, MacIntyre {inj}, Murray {inj} and O'Hanley {scr} did not dress for the Sharks... Prior to the start of the game, Sheppard was recalled from his conditioning loan by San Jose but will not play for them this season... Kennedy and Mashinter had their respective point streaks come to an end... The Sharks lead the AHL with 100 fighting majors. 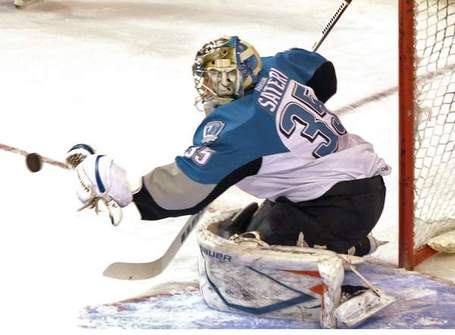 On Sunday afternoon {March 12}, the Sharks hosted the Phantoms in their first meeting of the season and were defeated 4-1. Combs had the lone goal for the Sharks while Harri Sateri {11-12-0, 2.78 goals against average, .904 save percentage} stopped 32-of-35 shots.

Despite controlling the flow of the play in the first period, the Sharks couldn't get the puck past Phantoms goaltender Michael Leighton. At 14:22, Phantoms forward Shane Harper gave the Phantoms a 1-0 lead with his 13th goal of the season on a breakaway chance that beat Sateri low on the glove side.

Just 57 seconds into the second period, Phantoms forward Matthew Ford extended the Phantoms lead to 2-0 with his 20th goal of the season. Off a turnover inside the Sharks zone, Ford corralled a rebound at the top of the slot and fired a quick shot on net that beat Sateri on the blocker side for the goal.

Combs cut the Phantoms lead in half and gave the Sharks life with his 13th goal of the season at 10:24 of the third period. Off a face-off win in the Phantoms zone, Moon corralled the puck behind the Phantoms net and centered the puck in for Combs, who fired the puck past the glove of Leighton for the goal. Brodie Reid was credited with the secondary assist on the goal, which was Combs' first in his last 10 games.

Phantoms forward Mike Testwuide answered back for the Phantoms at 12:39 with his 12th goal of the season. Off a failed clear attempt by the Sharks, Phantoms forward Rob Bordson fired a shot on net from the top of the left point that Testwuide, who was left alone all in front of Sateri, deflected past Sateri for the goal.

Coach Roy Sommer pulled Sateri for the extra attacker with 71 seconds remaining but Phantoms forward Tye McGinn, the brother of former Shark Jamie McGinn, buried home an empty net goal, his 10th goal of the season, at 19:15 to seal the Phantoms 4-1 win.