The Flames had a grand total of two scoring chances in the second period. They scored on both of them. If that isn't emblematic of how the past month and a half has gone for the Sharks, nothing is. Neither team was able to get to the scoring area with any degree of frequency in this one but Calgary rarely got there at all, registering just five chances in this game of which they converted three. San Jose ended up outchancing the Flames 7-5 at evens and 13-5 overall but despite the 6 power play scoring chances, the Sharks were only able to muster two quality opportunities on the 5-minute major to Curtis Glencross. 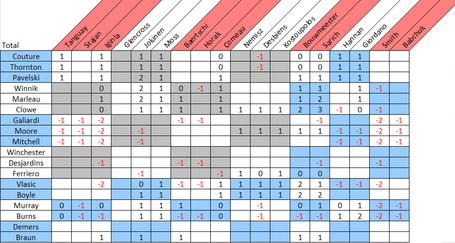 The third line for the Sharks was the only one underwater. They had a lot of trouble advancing the puck and weren't able to move past board play on the few occasions they did gain the zone. Vlasic had an uncharacteristically poor game, on the ice for three of the Flames' five chances, all three of which happened to find the back of the net with Pickles at least partially shouldering the blame on two of them.